In 1895, Winchester introduced a new, whiz-bang center fire cartridge, the .30 Winchester Center Fire.  Oh, it was a modern wonder, throwing a 170 grain bullet at 2200 feet per second with newfangled smokeless powder.  It was a modern marvel, and the American shooter took to it like a duck on a june bug.

My old Antique Carbine is still in the safe.  It's not an antique, that's just what Winchester called it when it came out in the late '60s.  Some say 1965, some say 1967, but everyone agrees that it is Winchester's first "commemorative" carbine.  One wag described it as "Winchester's ttempt to put lipstick on a pig.", but it works, and it's tight.  Mine carries a Willians peep sight. 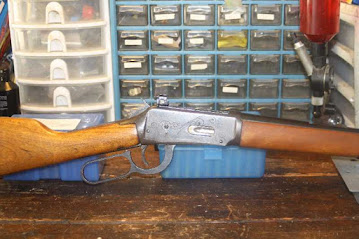 The .30-30 Winchester brass has a long, lovely neck, perfectly suited for cast bullets.  The case has more neck than Audrey Hepburn, which is great for supporting a cast bullet. My notes tell me that I can drive it to a bit over 1900 fps with good accuracy, and everything I shoot with it will stay shot.

This should give me a pronect to think about this summer.

My Dad got a Model 94 .30-.30 in 1948. Until a vehicle fire in 1993 it was the family meat gitter. Colorado Rockies. That rifle took deer, elk, and pronghorn. Firearms snobs may sneer at it but it is the shooter more than the tool that makes the difference. That rifle lived in a scabbard behind a pickup seat, not some gun safe, and was rugged, durable, and reliable.

Had the blues ever since I sold my Marlin 336 last year on gunbroker . It did go for over $800 though so I can live with it .

That was back in the 1960's, when Winchester began commemoratin' all kinds of events. The pewter silver receivered John Wayne commemoratives looked great, but too much coin, regretably. I passed on a 26" Canadian Centennial I now wish I hadn't. Not many 26" octagonal barreled 30-30s these days.

Lever action 30-30s made a lot of good memories. Many of their users are now deceased or retired from hunting, but they 'made meat' very well.

I prefer the Marlin 336, because the top strap means that you can easily mount a low power scope directly over the boreline.

Termite - the Winchester 94AE (Angle Eject, circa 1987 to termination) models will allow over the bore mounting as well. I am a fan of Marlin 336s, Winchester 94 but my real happiness lies with a Savage 99T carbine.

Lever action vs 'assault rifle' is kind of like comparing a butchered honda civic street racer to a classic muscle car...
Style matters. A lot. It's the gravitas of the lever action and the work scarred wood that have a rugged appeal. It screams 'no soy products' and self reliance. It draws the mind back to a time in our culture when men were expected to be manly. When it was understood that boys had to undergo certain rites of passage on the path to manhood. Being trusted with the family rifle was a milestone in life.

Got a box of Hornady Flextips sitting on the loadbench and an underused 336 sitting in the safe. Been meaning to play with some test loads with those. Long overdue to work up some loads.