It's hurricane season, and we have o start worrying about such things.  There is a disturbance down in the southern Gulf that has everyone's attention.  It's not named yet, but they are giving it a good chance of ginning up into a named storm. 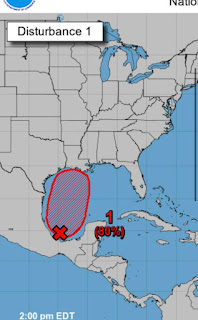 Most of the weather-weenies think it will be a rain-maker.  But, we've already had two named storms this year, so who knows what is likely to happen.    It's summer in the tropics, and here we go.

I am told that Montana is having a heat wave.  Can you believe it?

And there's not a single one of us happy about it. It's pretty unusual for us to have a "Red Flag" fire warning this early in the season, but that's where we were today.