Republicans Are Not Responsible for the Democratic Party’s Crime

To hear the press tell it, Democrats are facing a political conundrum (distinct from a genuine and organic problem of maladministration) in the form of rising violent-crime rates. And that problem is primarily a result of the fact that Republicans just won’t let the issue go.

There is no reason to let it go.  For the past year, the Democrats have fostered a climate of disdain for law-and-order.   The result is rampant crime in the larger cities in the country.

Homicides Have Skyrocketed in These 6 Democratic Cities. Black People Are Disproportionately the Victims, Data Shows.

Democratic leaders of most of the cities examined voted to greatly reduce police funding amid widespread Black Lives Matter protests last year. In the wake of the death of George Floyd, who died after former Minneapolis police officer Derek Chauvin kneeled on his neck in May 2020, thousands of protests and riots took place across the country.

Experts tell New York Times’ Mara Gay that spike in crime is due to ‘trauma, grief … and just general upheaval’  Perhaps Gay needs to read her own newspaper.. 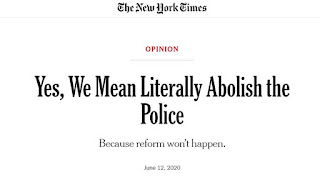 The Democrats profited from mayhem last summer and now they have no idea how to shut it down.
Posted by Pawpaw at 7:22 AM

Email ThisBlogThis!Share to TwitterShare to FacebookShare to Pinterest
Labels: Crime