There are any number of reasons to put a loop in a rope, cable, or piece of string.  Loops are useful.

Just because a cable has a loop, doesn't make it a noose.  But, when you go looking for nooses, you'll find them everywhere.

A construction company building a parking structure at Central Connecticut State University had hoisted an American flag at the end of one of its steel cable loops to mark Memorial Day — but a complaint that the cable was a noose prompted campus officials to apologize and pledge to take down the cable as soon as possible. 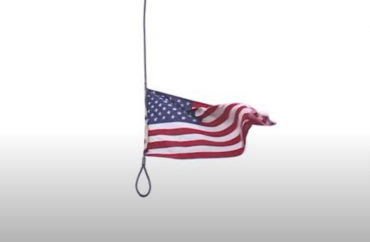 That is not a noose.  That is a safety loop. It's used in rigging.  We would think that the administrators at Central Connecticut State University would know the difference and educae whomever made the complaint.  Either by a rational explanation, or by pointing and laughing.  Sometimes mockery is a powerful education tool.

Email ThisBlogThis!Share to TwitterShare to FacebookShare to Pinterest
Labels: stupidity

So nobody on campus, maintenance staff, students, nor faculty, knows the difference. Big problem right there.

It doesn't matter anymore. You know nobody actually believes that is a fukking NOOSE. It's like some idiotic contest. The first to find something they can feign outrage over gets social points. Hell, I'm waiting for them to start pinning medals on these heroes for spotting the most ludicrous shit and putting on a good enough show of butthurtedness to get it noticed and find someone to make a big deal out of it with a straight face.
If someone showed me this picture and the stupid outrage when I was in the sixth grade I simply wouldn't have believed it. It's not reasonable for anyone to believe
One,That is a noose
And two, that someone can feign the outrage over it is somehow believable and should be honored and bowed down to, instead of laughed right the fukk out of town.