Grandson Quinton is a PFC in the Louisiana National Guard, and the other day, they told him that they wanted him to get a chance to fly in a Blackhawk helicopter.  Some sort award for being a super trooper. So, he showed up at the appointed time. 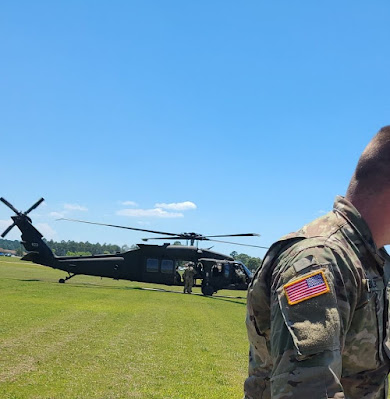 US Army Blackhawk helicopter.
He was able to get a door seat, and they didn't close the doors.

An areal view of Camp Beauregard, LA, just outside of Pineville.
Flying in helicopters is fun.  Most of the time.  He said they were in the air for a half-hour and he really enjoyed it.
Posted by Pawpaw at 6:33 PM

Good for him! My dad was a rifle/pistol instructor at Camp Beauregard in WWI.

That is all the way awesome!

He was able to get a door seat, and they didn't close the doors.

I heard that didn't work out so great for some Vietnamese.

He has taken more helicopter rides than I have.
I'm going to have to work on that.

That seat is the best one of the non- pilot seats. Way Back in Air traffic control School in 1978 at Fort Rucker Alabama. We were being trained in field operations. So they flew us out there in Huey's. I got the the same seat in a Huey and we flew on the deck(nape of the earth). It was a lot of fun. A Blackhawk would have been as well. But I got out of the army right as Blackhawks were coming into the Army.

I've flown on Huey's several times, but never a Blackhawk.