I'm sure that someone else thought of it first, but the muffuleta sandwich is claimed by the Central Grocery of New Orleans.  It's also hard to know whether it is an Italian, or French sandwich, but it does blend several cultures.  Central Grocery is just south of the old French Market on Decature street, a simple stroll from the market.

Belle's take on the muffuleta is easy.  On a fresh Kaiser roll, add olive salad, ham, salami, provolone and pepper jack cheese.  Add mayo or mustard if you like, but put in in a sandwich press and toast it all until it is a gooey mess.  Get plenty of napkins, you'll need them. 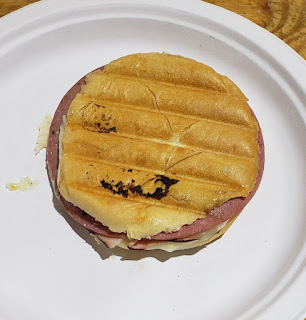 The Central Grocery doesn't toast their sandwiches, which cases some turmoil in one friend, who ate Belle's and then found themselves at Central Grocery.  She was quite disappointed in the original.

The muffuleta.  It's what's for lunch.

Muffuletas are one of the things that make life worth living. (Is it MOOF-a-letta or MUFF-a-letta? I've heard both.)

You need to have Italian cold cuts like mortadella and capacola. And the olive salad makes all the difference. MiL makes small muffeletta sliders for family gatherings .

Muff-a-letta... And yes, they are EXCELLENT!