The Barrel On The Toe

I didn't know shooters were still dog this, but let me give some background.

Along about 1966 or so, I started my working life as a skeet boy at the old McBride Rod and Gun Club, England Air Force Base, LA.  I was twelve years old, and it was a job made in heaven for a young fellow with boundless energy and a love for shooting.  I was pad the princely sum of 50 cents per hour, but got to shoot the extra shells at the end of the day.  Normally there would be a couple of boxes of what we called "breaks:, and the skeet boys got to shoot those at the end of the day.

One thing the range master hapred on was safety, especially the practice of resting the muzzle of the gun on the top of your foot.  It was quite common and it would set him off. 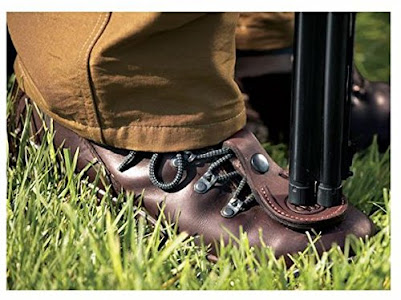 I understand that the gun was supposed to be clear, and after a couple of rounds of skeet, the gun starts to get heavy, but still, it's dangerous.

TTAG has an article about the practice, with some very NSFW photos of the predictable outcome of the practice. They ain't pretty, and you will hobble around for a while.  Let's not do this, please.

It's been frowned upon since the mid-60s and you would think we would have learned better by now.

Please fellows, don't rest your muzzle on your foot.

Got a skeet range right down the road from me . Never have seen that but I would have to say something if I did . Gun safety was real big in our home growing up . And we liked our toes Ha!Ha!Ha!

Saw it at TTAG and just shook my head. And that there would be a product to foster the practice is beyond real - available for as little as $9.99 online.

I've also seen this in firearm magazines and wondered why they did this too. At the time, I figured they were practicing muzzle safety for others rather than waving around or leaned against the nearest fixed item. Quien Sabe (Spanish for 'Who Knows').

In south Texas dove hunting fields while waiting for action, a loop of cord inserted in belt inserted into itself forms a loop where the gun butt can rest, allowing the person to hold the firearm with muzzle above the head with little fatigue.

Thhis was lovely to read