The unthinking Twitter world (but I repeat myself) is ablaze with unwarranted outrage about another black person shot by a police officer.  However, from everything I've seen, including the bodycam footage, it was  righteous shooting.

The facts are simple.  The police roll up on a disturbance and while trying to figure out what is going on, a young female starts swinging a knife, apparently trying to injure another female nearby.  One shot is fired.  The knife-wielding female drops to the ground.  You can see news coverage here.

Below, a screen grab of what the police officer saw the instant before he fired his weapon. 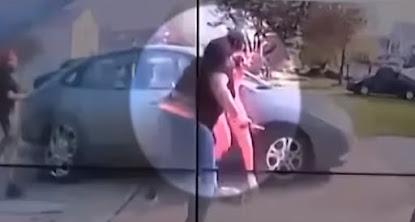 The knife is plainly in her hand, and she is attacking the person in pink. One shot ended it.

Of course, Columbus, OH, is in turmoil right now.  The agitators have decided to take the side of a knife-wielding idiot who was actively engaged in trying to hurt people over the side of law and order.  The girl's Momma is all over the news, telling us what a sweet person she was.  Maybe Momma should have spent more time on anger-management issues and teaching her not to play with knives.

I have no sympathy for these fools. It was a good shoot, plain and simple.

Yep, if the girl in pink had been stabbed, THAT would have been the Po-Po's fault too... sigh

I'm going to Tennessee this week to deliver some Fainting Goat babies and will have to drive right through the middle of that mess to get there . It'll cost me an hour but I think I'll drive around it . Far around it . I used to work there until I retired in 2012 . It was always strange getting into downtown Columbus after a whole weekend in the hills as my nose got back its sensitivity . The first thing I noticed on Mondays was the putrid smell of garbage rising from the city . Don't miss it !

Dollars to donuts this was a gang initiation that went sideways.

but but but she was a just a 16 year old baby...that girl was bigger than most of the officers there, armed with a knife...and she was aiming at the neck/head of that girl in pink when she swung...doesn't matter what we do...only one way to win and from the looks of it, we haven't reached that point yet...what will it take is the question...

From what I understand, it was a foster home that the angel lived in. I'm curious to hear from momma why that is.

"I'm curious to hear from momma why that is."

- You could just ask the baby daddy. He was present and is seen apparently trying to kick one of the girls who was down. Don't expect a rational answer though.

It’s certainly a sad thing. Even if it is a good shoot, which it certainly seems to be, the avoidable loss of life is unfortunate.