I've been hearing rumors that they are finally going to put Harriet Tubman on a $20 bill.

A WaPo columnist thinks that conservatives are distressed over the idea.  Not this conservative.  If they used this design, I think it would be cooler than hell. 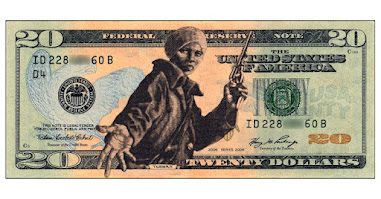 I think that would be a fine design that captures her spirit.  I think it's a capitol idea.

Andrew Jackson is okay, but Harriet Tubman is cool  Especially with that Colt revolver.

UPDATE** Below is the design the progs want to use.  Not as cool and the one above, but they certainly can't have her with the welcoming hand while the other holds a revolver, ready for use. I bet Harriet would be disappointed with the one below. 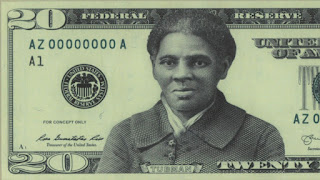 That one is altogether too staid for Ms. Tubman.

I had thought about telling my bank or who ever gives me one of these bills "no thanks".Two tens, four fives anything but this. Then the thought of turning as many as I could into some sort of picaninny...? Colorize if you will.

They are a strange bunch. Probably engaging in more projection. Don't they realize that most of us have lived around, and worked with black people, and have, most of our lives? Segregation has been gone for a while. Who cares if a black person is honored on a bill (well, as long as it isn't light bringer, that would be offensive.)? It must bother them though.

Tubman is an OK choice. And the chosen image isn't a great one, the other one was probably deemed too problematic with its obvious connotation of escaping to freedom.

I honestly don't care if a black person is on any of our money, as long as its a person worth exemplifying. Tubman is an OK choice, but I would have liked others more. That the left gets bent out of shape over what they think conservatives want is actually kind of hilarious as they show their own values projecting. But then again, history isn't anything the left understands. I remember seeing a certain well known fantasy author posting about how it was the progressives/democrats that won the ACW. That just proved to me that he truly was mentally ill.

WOW, I didn't realize that the demoncrats had conquered every bad thing in our society so that they can concentrate on frivolous stuff like this.

I'd rather the Mint put Frederick Douglass on the $20 bill.

He did lectures at Hillsdale College.

Douglass was a firm believer in the equality of all peoples, be they white, black, female, Native American, or Chinese immigrants. He was also a believer in dialogue and in making alliances across racial and ideological divides, as well as in the liberal values of the U.S. Constitution. When radical abolitionists, under the motto "No Union with Slaveholders," criticized Douglass' willingness to engage in dialogue with slave owners, he replied: "I would unite with anybody to do right and with nobody to do wrong."

Whatever image they choose, you can bet it will be ugly. Have you noticed that our coinage used to have very nice engraved images. Now the images look like they were made by a Kindergartner.