Article 2, Section 2 spells out the duties o the President, and in part, includes:


he shall have Power to grant Reprieves and Pardons for Offences against the United States, except in Cases of Impeachment.

There has been some comment about the President tweeting about a case involving his friend.  This is all politics.  We know that Obama protected his friends and allies from scrutiny,intervening when necessary, and the Democrats never said a word.

Just for the record, here is a little graphic to remind you how Obama put his thumb on the scales of justice.  And that's okay, because Article 2, Section 2 gave him that power. 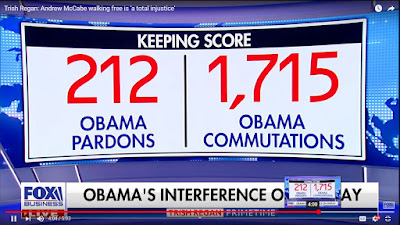 It's the double standard that bothers me more than anything.
Posted by Pawpaw at 9:19 PM

As reported by Stanford Medical, It's really the ONLY reason women in this country get to live 10 years more and weigh 42 pounds less than we do.

(Just so you know, it has absolutely NOTHING to do with genetics or some secret exercise and really, EVERYTHING related to "HOW" they are eating.)