We all remember our first ride.  Mine was a 1960 Ford Falcon that I got about 1969.  Today, grandson Zch got his first ride.  My mother had been driving a Toyota sedan for about 15 years and decided to upgrade to a newer model.  She passed down the car to me, for grandson Zach.

Zach lives with us, for lots of reasons, and he's a senior in high school.  He doesn't ask for much, and we do what we can for him.  He doesn't have a driver's license yet, but is in driver's ed  He'll get his license next month after he completes the course.

The car in question is a 2004 Toyota Camry.  It's fairly bare-bones, but was top-of-the-line in 2004.  It has A/C, the heater works, it has a radio and a cassette tape deck.  I wish that it had a standard 4-speed, but the transmission is automatic.  He seems to like it. 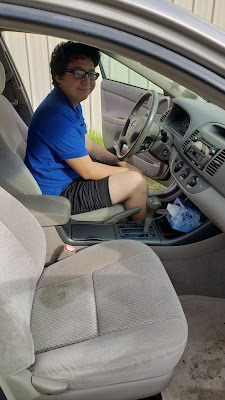 It's fairly low-mileage for a 16 yea old car, and I believe that it has another 100K on the drive train if he takes care of it.  I know that it has been cared for.

Sometime around the 1st of the month, my insurance is going up.
Posted by Pawpaw at 4:14 PM

Very nice! Much nicer than my first car!

A lot nicer than my first car too! I started with a 1963 VW Bug. It was missing most of both front floorboards due to rust, had an almost entirely non-existent heater/defroster (yes, in Michigan that means you drive with the ice scraper in one hand and steer with the other - while dealing with the manual shifting), no seat belts and a rope to hold the driver's door shut. Bought it across the state line from a guy who was selling it cheap ($35 in 1977) because it couldn't pass whatever kind of mandatory vehicle safety test Indiana had at the time. Yep - THAT's what my parents thought would be an ideal vehicle for their oldest child to drive around in - a rolling death-trap.

Didn't you get the memo? The new driver ALWAYS pays for their own insurance. How much you wish to enable the kid is up to you but I advise against it. I'm a bit sorry for butting in.

Here's to hoping the boy creates fond memories of his first ride.

Her name was Emmy Lou.
I bought my truck in exchange for a cord of wood I cut, split, delivered and stacked. $100 and a six pack of beer got me a new used engine installed. The floor board was aluminum road signs tack welded in place. The radiator had so many holes the least expensive repair was to plumb to a 5 gallon bucket sitting on the bench seat. The tail lights usually worked. The radio only got AM country stations.

Speeding down a mountain road I knew well, the hood flew open. I secured it with a straightened spring taken from under the seat. I learned to play cat and mouse with johnny law; if I got caught the deputy would run out of ink writing up the fixits.

In the 3 or four years I owned her, she cost me a new starter, new brakes with new master cylinder, entire new clutch, rebuilt tranny and I'm sure a few other things. When I say new, only seals and rings were store bought, the rest was picked from the local bone yard.

But I had much pride in her. Could be said, my first love. She climbed hills like a mountain goat. That granny gear was great for pulling stumps out of the ground or sledding boulders. She shook off anything thrown at her - like slipping into a ditch with 3 cords of wet Oak in the bed and cracking the rear axle. Drove her out of that one.