The Winner In Iowa 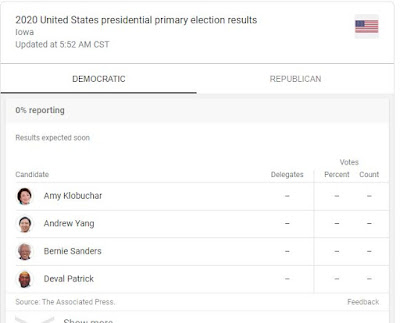 No one knows.  It appears that the system crashed and there are no official numbers available to guide us in our question.

It's not like they didn't have four years to get ready.  And, I note with some small mirth that the Dems have had quite a week.  First, their impeachment effort augurs-in, then their first caucus crashes and burns.  Complete and total disaster seems to be their continuing modus.  Some are claiming that their app was hacked, others are claiming that their whole party has been hacked.

Joe Stalin once said that it didn't matte who voted, what mattered was who was counting the votes.

I have never understood the caucus system, but shrugged off my lack of understanding.  Let Iowa do what Iowa will do.  Now, I've come to believe that Iowas doesn't understand it either.

The big winner?  Donald Trump and the GOP.  The Democrats have now tainted this entire process and voters are sure to take note.
Posted by Pawpaw at 6:08 AM

Email ThisBlogThis!Share to TwitterShare to FacebookShare to Pinterest
Labels: elections

Just wait, by the end of the day they'll be claiming that Trump hacked the caucus votes. It'll be "the next big thing".

Actually, the Republicans did it correctly. They voted for the 45th president, Donald J. Trump.
It is the Dumbocrats who get confused by voting, due to a serious case of genetic retardation. They also get confused by life, sex, bathrooms, private property, and the age of consent.