Regular readers know my fondness and preference for Savage rifles, especially my old Model 110 in .30-06.  There is nothing whiz-bang about it.  It's as plain as they come.  It started life as a synthetic stock, but the Savage stocks in those days were terrible, and I broke it when I dropped it from a tree stand, so I ordered a 90% stock from somewhere and finished this one the way I like it.

Oh, I own other rifles, but this is the one I grab when something needs to be whacked with a medium caliber.  It puts a 168 grain bullet where I want ti to go, and I've only had to shoot one deer twice.  She was an old barren doe, and I hit her hard at 125 yards and anchored her.  When I got to her about ten minutes later, she was still breathing, so I put one in her neck to end the suffering.

I shot the rifle last autumn, but haven't shot it since.  I picked it up yesterday and noticed that the scope was loose.  Horror!  A closer look showed the problem. 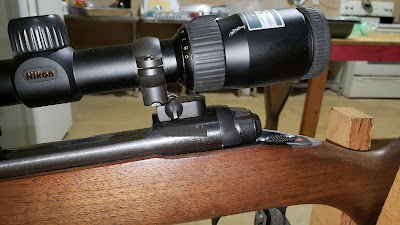 The rear scope ring had turned loose from the base.   Probably under recoil.  Here's a closer look. 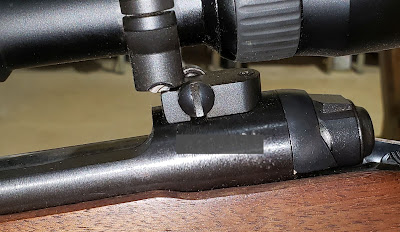 It was an easy fix, and gave me an excuse to spend an hour with the rile, making sure everything was tight and right.  I put Redfield bases and rings on this rifle, back in 2006, and they've always done me right.  This gives me an excuse to head to the range ext week, to verify the zero.  I don't expect tack-driving accuracy from this rifle, but I do expect it to shoot where it looks, and so far it's always done that.

Today is May 1st, and deer season is only six months away.  It might be time to put a screwdriver on everything and make sure your rifle is tight and right.
Posted by Pawpaw at 6:00 PM

Good thing you checked now. That could have spoiled a shot at a real wall hanger. Or some much needed meat for the freezer.

Dad was a lefty, and always thought a LH 110 was in the cards. Not many rifle manufacturers catered to lefties back then. He instead found a LH Remington 788 and purchased that.

Good point, I need to do that.

You should take the sticker off of that scope.