Our current crop of physicians could learn a lot from watching a bunch of cowboys work a herd during the spring or fall evaluation of the herd.  Basically, you round them up, get them in pens, and run then through the squeeze chute.

Cattlemen love their herds, it's what they do.  Cattle are a source of profit (theoretically) and a good cowboy wants the herd healthry, so twice a year you doctor on them..  A dose of wormer, threat them for ticks, and evaluate each of the cattle in the herd. 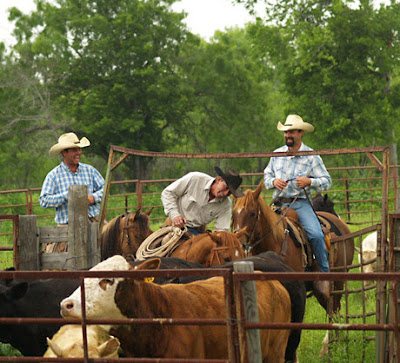 It's group medicine, ad while you're looking for problems, you insure the health of the herd.

It's not brutal, it's gentle as possible, but it's efficient.  If you see a problem, yo cut that one out for further evaluation. 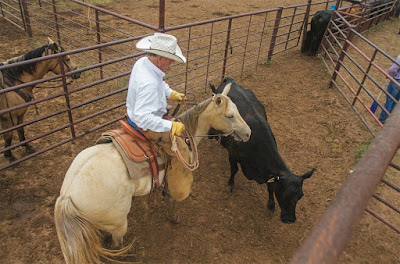 When you have several hundred cattle to treat in a day, you don't have time for niceties.  You want to get the herd back on pasture as soon as you can.  This reduces stress on the herd.

Modern human medicine is getting to be a lot like squeeze chute medicine, without the care and concern that the cowboys give the herd.  I just spent three hours in a thoroughly modern medical clinic and never saw a doctor.

The crew fell behind, putting the herd in stress.  I watched them, twice, lose patients, much like a cowboy losing a cow that he already had in the pen. As we process through the chute, falling further and further behind schedule, they finally put a bunch of is in a final pen, where the main topic of conversation was how far behind everyone was falling.  And, the crew still wanted to make small talk.

It got so bad that when one of the crew would ask me how I was feeling, I told them, "Hungry, thirsty, and angry."

I understand that if a physician has an emergency, we might be late.  But, today I had no expectation of seeing a physician.  So, there is no excuse for anyone being late.

If modern medicine is going to show contempt for me by being late for appointments, don't be surprised when I reflect that contempt.
Posted by Pawpaw at 12:34 PM

Email ThisBlogThis!Share to TwitterShare to FacebookShare to Pinterest
Labels: medicine