Sometime last year, Belle asked me what I wanted for Christmas.  I told her that I wanted a skillet.  A really nice, cast iron skillet.  We ordered a 12" Stargazer skillet.  It has been reviewed favorably on Cowboy Kent Rollins YouTube channel.

Shortly before Christmas we started getting emails.  They were having problem.  Evidently, it's not easy to scale up the molds from a 10" to a 12" skillet.  Then they had problems wit the bottom inscription.  Then they had other problems.  It became kind of amusing, but the company kept us informed, and even gave us a chance to back out of the deal.

I decided to wait and see how long it would take.  And earlier this week we got a shipping notice and the USPS brought it today.  I have to admit, it's really a nice sillet. 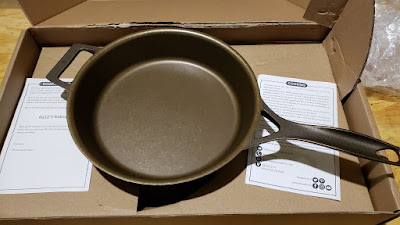 The inside is smooth as a baby's butt, and it should take seasoning quite readily.  I ordered it pre-seasoned, but it will need to be cooked in a few times before it starts to look like a seasoned skillet. 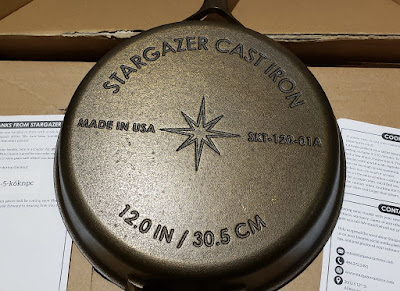 I won't get to cook in it till next week.  Tomorrow morning early, we're going to Houston for an event that Zachary wants to attend.  I've waited this long to put it on the counter, another few days won't hurt.

Is it any better than a big Lodge.  Or for that matter, a nice antique Wagner or Griswold?  I don't know, but I do know that cast iron is my favorite cookware, and we need to support these companies that are making really nice cast iron.  This piece is heirloom quality, and I'm sure that it will be used long after I'm goine.
Posted by Pawpaw at 12:39 PM

Hope the rain didn't effect your plans. It's been a bear out here.

Looking forward to your AAR on it. I backed out after the second set of delays...

Best way to bump up the seasoning in cast iron is to make a good dark brown Cajun roux.

Then you have a roux. Gumbo or sauce piquant is only a brief step away.

Aquired most of my Grandmother's cast iron . Wife thought I was nuts .
Until I made ribeyes one day. She saw the light and now probably uses them as much as I do. R.I.P. Grandma D

I have one too. Been using it for about four months. The old Lodge 12" hasn't seen the stovetop in those same four months. Enjoy and cook lots of great meals in it.