Learning of the recently published CFDA procedure regarding holster angle, I went to Lowe's and bought a General Tool and Instruments Steel Protractor.  Next, I took out some holsters and attempted to learn how to measure holster angle.

Here's the problem; an angle gauge generally needs two flat surfaces on generally the same plane to get a dead-nuts accurate measurement.  In fact, wit holsters, the measurement angles are on different planes.  So, any measurement is a gesstimate.  It might be close, but we can't be sure it's dead-nuts, especially with the tool I purchased.  For example. 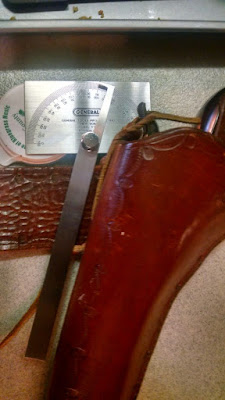 Above is a JDL holster for the long gun.  I aligned the measurement surfaces as well as I could, and measured the holster angle at 17 degrees.  I've included a close-up below. 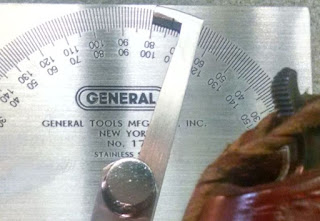 That's the way I measured it, but other folks might get a different measurement with this tool.  I asked Belle to measure it, an she came in with a full 20 degrees.

Next,I measured a JDL holster for the short gun. 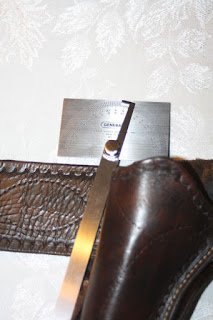 Aligning the angle surfaces as closely as I could, I came in with a measurement of 17 degrees.  Again, this is a guesstimate, as I was unable to fully align the tools surfaces with the holster leather.

I believe that my measurements confirm that the JD Leatherworks holsters for both long gun and short gun are in full compliance with CFDA rules.  I also measured a Ken's Leather holster at 17 degrees and a Crease N' Corral (Part Time) rig at 18 degrees.

But, I may not have the best tool for holster angle measurement.  Texas State is in March, closely followed by Louisiana State in April.  While the tool I have is a readily available tool, I'm not convinced that it is the best for our purposes.  We all want to play by the rules, and we all want o do right for our shooters and the game.  We rangemasters need to figure this out pronto.    Is there a better tool for holster angle measurement?  Has CFDA specified a tool?

We need to figure this out, quickly.
Posted by Pawpaw at 3:56 PM

Lay the belt along a straight edge.

Put one of them fancy-pants laser bullet pointers/boresighters/target practice items - on - inside the chamber aligned with the barrel (for revolvers), with the weapon in the holster. (Obviously, this only works with open-bottom holsters, but yours appears to be such, so...)

A 90-degree T square with some length should allow you to measure the angle of the laser beam, hence the barrel and holster itself, with the vertical 90° line, whether you do it flat, or upright.
And get the reciprocal, which is your cant, either way.

hello!,I really like your writing very much! percentage we be in contact more about your article on AOL? I need a specialist on this area to solve my problem. Maybe that's you! Looking forward to look you.