It's been a while since I wore one of these, and the legend and lore of the Cavalry Stetson is strong in my blood.  While the Stetson hat is closely associated with the Cavalry, the pure history is that John Stetson didn't begin making hats until 1885.  Prior to that time, the Cav wore hats from other makers.  So, from an historical perspective, the Cav Stetson didn't exist prior to then.

However, the Cavalry wore hats, generally wool felt, or fur felt, and the hats were generally black.  During the 1880's or 1890s they wore varying colors, including tan.  But, the classic Cavalry Stetson is a black felt hat of the western style.  Crown styles vary, even today.  You see the Cattleman, Brick, or Gambler style. Occasionally a pinched front, but styles vary even today.  The pure truth is that Stetson didn't start making hats until 1885.

I graduated from the Cavalry course in 1985, as a portion of the Armor Officer Advance Course.  I am qualified to wear a Cavalry Stetson.  When I joined the CFDA in March of this year, I wanted an alias that I would immediately and instinctively answer to .  My soldiers called me Major D for eight years.  It was a name I'd answer to in a whisper or a shout.  I took Major D as my CFDA alias.

Three weeks ago, Milady bough me a black felt hat.  Game on.  It was time to build my Cavalry hat.  I clicked on the US Cavalry Store and found the proper brass and hat cord. 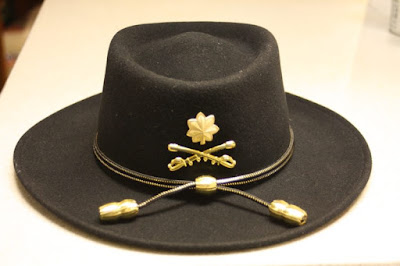 It's been a while, but there's a Cav hat back on my hat rack.  I feel pretty damned good about that.
Posted by Pawpaw at 6:09 PM

Matt said...
This comment has been removed by a blog administrator.
8:30 PM

Thank you for serving, then and now.