In a few minutes I'm going to fold this computer into its bag and start packing the car.  We're going back to the match this morning, where they'll run the finals for mens, womens and youth.  None of us will be in that match, but they'll have shooting for the also-rans, in the form of a braket match.  So, we'll all get to shoot again today, if only to keep the guns limber.

Noon-ish, there will be the final awards ceremony.  There will be a couple of drawings for pistols, and we've got several tickets.  It would be nice to bring home a new pistol, although my luck with raffles is such that I hold no great hope.

A couple of pictures from yesterday. 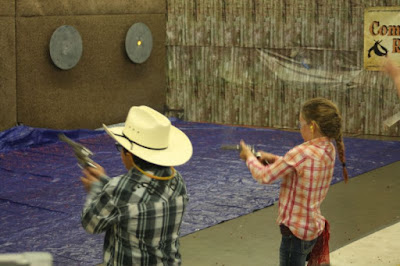 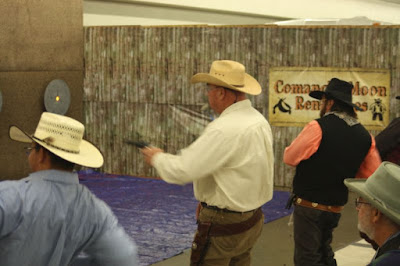 That's Thorn Valley's Big Mark on the line, and I'm not sure who he's shooting against. 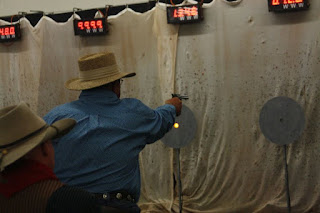 Last, and certainly almost least, is PawPaw hisself, getting beaten once again.

Today, sometime shortly after noon, we'll all be leaving Odessa and scattering across this great land.  For Milady and myself, we plan to stop in Fort Worth and spend the night.  There's a shop in the stockyards that Milady wants to visit again.
Posted by Pawpaw at 6:21 AM

Looks like fun was had. Have a safe trip home.

Travel safe, and it sounds like y'all had fun, even if you didn't win...