Upgrading the range, one paycheck at a time.  The little one-lane range worked good, but it was wedged into a corner.  Yesterday I was able to find some more "drops" to use as backers and this morning I went to the lumber yard and bought lumber, then swung by son-in-law's place and pressed a grandson into service.

Here's a view from the deck, looking downrange. 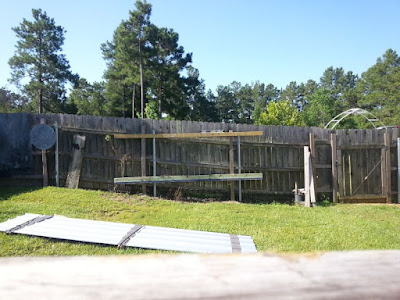 Those two light-colored boards in the center of the frame are the foundation for the 12 gauge drops.  It doesn't look level, does it?  Appearances are deceiving.There's some sort of weird optical illusion there.   It's dead-nuts level.  Off to the left of the frame you can see one of the targets where the range was originally located.

We installed the drops on that framework and placed the targets in front of the backstop. 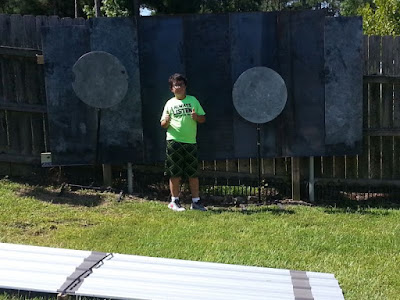 There is a good deal of slope along that line, and it leads to some interesting visual effects.  Both targets are 50 inches from the ground as measured from the firing line. Each shooter, regardless of which target he's on, is shooting at a 24" circle, 50 inches above the ground.

That galvalume metal at the bottom of each photo will be installed tomorrow, and as funds permit (one paycheck at a time), I inted to install a small deck for the targets to stand on, and another on the same level for a firing line.  That should minimize the  optical illusion of the ground sloping down to the right.

Still, we're making improvements one paycheck at a time.  Many thanks to Zach for his grunt labor.
Posted by Pawpaw at 11:16 AM

I call them optical delusions... :-) And pretty soon you're going to have a real range set up there, and having competitions!