It's Friday afternoon in these parts, and that means the weekend will soon be upon us.  Milady has gone to get her mother, Miss Reba, who will spend the night with us, preparatory to a hair appointment tomorrow.   I have been tasked with cooking some chickens, because I've got nothing better to do, and because I've been cooking old, dead chickens for lots of years.  Some other family will be around, so I figure four smoked chickens should be about right.

Before you wonder if I've been in the whiskey at this early hour, that's an old family joke.  My first father-in-law, Boonie, was a master of cooking chickens.  He could start with a flock of birds and render them into tasty, succulent smoked chicken in an afternoon, and he always cautioned us to use dead chickens.  The live ones jump around too much.

Fortunately, in this modern era, we can buy dead chickens at the grocers, so this morning while Milady was out running errands, she picked up several dead chickens.  That takes most of the work out of the prep.  Starting with live chickens is messy.  Dead chickens are much easier.

My recipe is simple.  Take the (dead) chicken out of the bag, remove the giblets and wash it, then pat it dry.  Coat it with margarine, then sprinkle Tony Chachere's liberally across the skin.  Put him in the smoker at 275F for four hours.  Or thereabouts.  When you reach in to pick up the chicken, if the leg bone comes off in your hands, it's done.  If you like livers and gizzards, make a little pan out of aluminum foil and put them in the smoker with a little butter and Tony's.  Let them sautee in that butter while the chicken cooks. 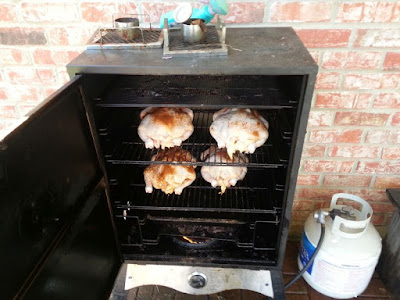 I put those brids in the smoker at 2:00 local.  I've got several thermometers poking through various holes in that box, and as soon as I get the temperature regulated, I'll ignore it until just before supper time.  There is no reason to open that door before then.

Milady is responsible for the rest of the meal, and I understand we're having Ouida potatoes, butter beans, okra and tomatoes, and cornbread.

If that doesn't suit them, they can stop at Burger King on the way home.
Posted by Pawpaw at 2:31 PM

If that doesn't suit them I'll be glad to eat their portion.
Fred

A smokevault. I'm on my second one myself.

That is exactly what I did on Sunday. Two great minds, one great thought. Except I whacked mine in half so they would cook quicker.