We wrapped the shade awning with a tarp this morning, courtesy of Harbor Freight.  That will do until I can install the metal roof, but we can sit under shade now.

The west end of that awning has always been a problem, because the afternoon sun comes in under the west end as the sun goes down.  So, I bough an extra-long tarp and I'm experimenting with a Roman Shade concept for that western exposure.  Hopefully it will make the deck more liveable in the late afternoon sun. 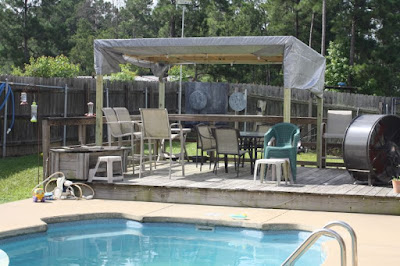 My buddy, Old NFO, commented yesterday that I should expect the project to "grow".  I suspect you're right, Jim and I'm already thinking about phase II.

I promised the boys I'd cook ribs for the evening meal.  About 1:00 I'll put them on the smoker.  With beans and potato salad that should be about right and they'll be well fed before I bring them home after supper.  Grandson Zach showed up late yesterday afternoon and spent the night, so I've got the company of three fine fellows.  They're in the pool now, but we may have to do some shooting this afternoon while the ribs are cooking.

Pick up a piece of wood deck lattice and place it on the most troublesome side of the new sun awning. That will provide shade but still let a breeze to move through/

SprtPilot - Thanks, but I hate wood lattice. Abhor it.

Ed - That's in the plan, shortly after we install the roof. The deck is already wired, so a ceiling fan should be easy.