Today was the first day of the Odessa Shoot, formally titled The Southern Territorial Championship.  Today we had category matches, an opportunity to shoot against your own age group.  With several age groups, it's an opportunity for some folks to excel.  And, it's good fun.  A few photos.

That's two of my good friends on the line, going head-to-head.  They shoot in the traditional category and they're both very fast. 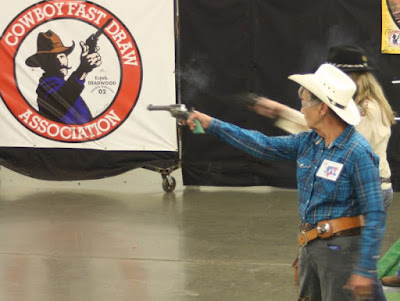 That's Milady on the line, also known as Louisiana Calamity ane.  She's running and gunning in the Ladies Senior category. The guy in the white hat is grandson, Zachary, also known as Akarate Zach.  That's pronounced Accurate.  Next to him is Willie Hit It, Then next is Lonestar Leadslinger. Then, Trigger Happy on the far end.  Good kids all, great competitors, and fun to be around.

We finished the evening with a fun shoot, not part of the competition, but purely to raise money for  the CFDA scholarship program, Shoot For The Stars.  It's a fun shoot, fast and furious, with some weird rules.  Times faster than .700 don't count (in fact, if you shoot a .699 or faster, it costs you a dollar.)  Times over 1.000 don't count, so what you're trying to do is shoot between .700 and 1.000.  Nothing else counts.  And, everybody is thrown on the line together. 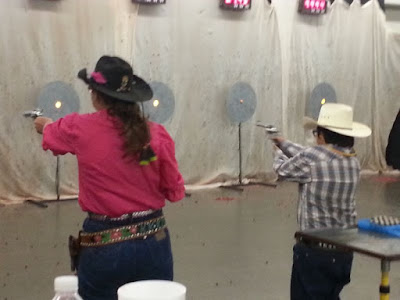 Here is KK Kid, a very fast woman shooter, against Akarate Zach.  KK is trying to slow it down (she normally shoots in the .3s and .4s) against Zachary, who is just trying to stay on the line.  It's a lot of fun, and raises money for a good cause, youth college scholarships.

All in all, it was a very good day.  The host clubs took care of us, fed us well, and everyone had a great time in a wonderful venue.  Tomorrow is the main match, so I'm going to take off my boots and have a little drink before I turn in.  Tomorrow is going to be fast and furious.
Posted by Pawpaw at 9:02 PM