Here's one I missed. It seems that since folks have been looking at raw climate data over the past several days, it appears that the climate data from New Zealand was fudged.

Yeah, the warming trend that was shown for the past decade doesn't exist. The data is skewed.

Analysis of data from the National Institute of Water and Atmospheric Research (NIWA) show ‘corrections’ to climate data may have exaggerated temperature increases over the last 10 years.

Here's the fudged data in a graphic. 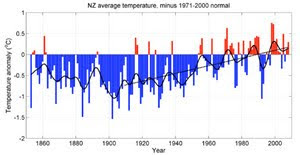 Here's the actual data. It doesn't show a temperature increase. 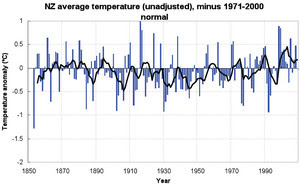 In a statement, the coalition said, “We have discovered that the warming in New Zealand over the past 156 years was indeed man-made, but it had nothing to do with emissions of CO2—it was created by man-made adjustments of the temperature. It’s a disgrace.”

They're right, it is a disgrace.
Posted by Pawpaw at 5:07 PM

Since all these "scientists" and "activists" all over the world have been taking public money, then knowingly cooking the data, it is not only disgraceful, it is criminal. I'd like to see some serious prison terms handed out. The Algore should be doing fifteen or twenty years of inconvenient time.

I suppose we could read the scientific explanations for the data that you term "fudged", but that's a little more boring, I suppose.

Unless you don't think that changes in temperature monitoring locations should be accounted for.

It's not my term, oyster, it's their term. One line of code in the UEA code is entitled "fudge factor". So, we've got scientists using fudge factors (their words). Sounds like good science to me.