It's become a tradition within the family that after the Thanksgiving meal, those so interested repair to the pasture for a little informal shooting. Today I decided to let the nephews try skeet, so I brought a variety of shotguns, shells, targets, and invited all and sundry to try their hand at shotgunning.

Here's a picture of nephew Trey, trying his hand with my father's custom 16 gauge Model 12 Winchester. In this picture, he's calling for a target. The shotgun is the one my father shot everything with. I had always wondered why Dad chose the 16 gauge, and Momma was watching the shooting. She told us today that all of his brothers had 12 gauge shotguns and Dad chose the 16 so that his brothers couldn't shoot his shells. Makes sense to me, and sounds like the old man. I bet he'd be happy that his shotgun still booms over the pasture. 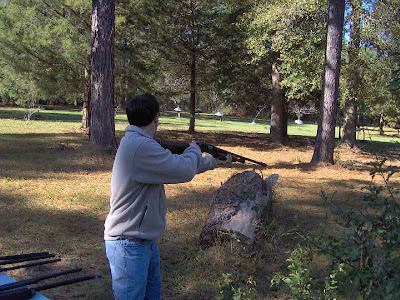 We had plenty of shotguns available, arrayed on a table with the action open and visually safe. The shooter would choose his or her shotgun and step forward of the table. One shell at a time was passed forward. Safety is our byword, and while the shooters were standing in front of shotguns, every eye was on the open actions and one nephew would pass one shell forward at a time.

My daughter-in-law, Melissa decided to try her hand at various gauges. We had everything from .410 bore, up through 20, 16, 12, and one huge 10 bore shotgun available to sample.

This next pic is Melissa trying Dad's 16 gauge. In this picture, she's in recoil. She had her own .410 on the table, but wanted to try the larger gauge. After a couple of shots, the proclaimed it "not bad at all". We'll work on her stance in future sessions. 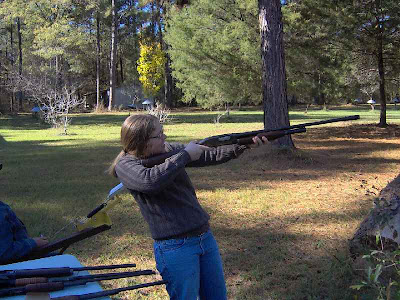 This next picture is of her father, Brian, shooting his 10 gauge H&R single-shot. This hand cannon shoots 3.5 inch shells and all he brought with him were magnum Black Cloud ammo. This thing is a boomer and when you hit a target at 20 yards, all you get is a cloud of dust. This thing vaporizes skeet targets. I tried to get the picture of the cloud of target dust, but couldn't get the timing right. 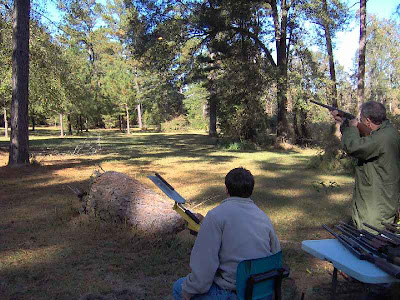 Still, you can click on the pictures for larger images. We had a great time, bonded as a family, and did a lot of shooting in the pasture. Add the wonderful meal and a Thursday afternoon doesn't get much better than that.

I hope you all had a wonderful Thanksgiving.
Posted by Pawpaw at 3:58 PM