Playin' with the Boy

The kids got in on Saturday afternoon and we've been playing with the youngest grandchild since then. I had forgotten how much energy a toddler brings into a household. 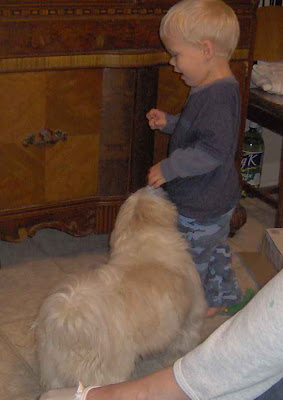 This morning Joey and I sneaked off to the range where we spent an hour or so shooting handguns. Both revolvers and semis. We worked our way through several cylinders of .38 special wadcutters, several cylinders of heavy cast bullet .357, and several magazines of .45 ACP. While we were reposting targets, my several-years-old stapler gave up the ghost. I bought that stapler about fifteen years ago, so I guess I shouldn't complain too much. It stapled up several thousand targets over the years and finally blew out the magazine spring. I dropped it in the garbage can and I'll pick up another one soon.

On the way home, we stopped off at Philly's Pizza, a local Tioga eatery. They make a pretty good cheese-steak and I picked up enough sandwiches to feed everyone lunch. Then, it was nap time.

The kids have driven across town to see other family and I've got a couple of hours to sort brass and clean out the range box.
Posted by Pawpaw at 1:43 PM

Bottle that energy and sell it, and you'll be a millionaire! :-)