Via Kim du Toit, and others, we learn from Radley Balko that Sheriff Lott, of Richland County, South Carolina has acquired himself a new toy. 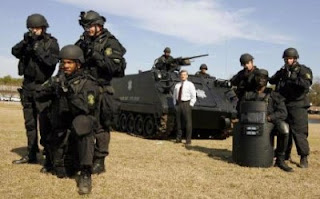 That's an M113 Armored Personnel Carrier (APC). It's a diesel powered, light armored vehicle. Its primary armor is aluminum plate. It weighs about 12 tons. It has a crew of two and can carry eleven infantrymen. The primary armament is the Ms Deuce, the Browning .50 caliber machine gun. It was originally designed to carry an infantry squad, and did a hell of a job for the past 40 years.

It's a cool toy, but what the hell does he intend to do with that thing? A .50 cal? Yeah, right. [sarcasm]That's a suitable weapon for police use.[/sarcasm]

As a current cop, I can't see a use for that thing, except as an all-terrain vehicle in swampy terrain where fording the odd creek or bayou might be in order. It would make a great vehicle for search operations. Other vehicles might do as well, including any of the current crop of 4WD ATVs, which would use a whole lot less fuel.

I deplore the militarizing of the police departments. We're civilians, not soldiers. The M113 is a military vehicle. The Ma Deuce is a huge machine gun. I wouldn't want to employ one in a place where overpenetration and ricochet might be a problem. The .50 cal round overpenetrates like a sunovabitch and ricochets like a meteor. I wouldn't want to fire one in a populated area. By populated, I mean any place where people might be downrange out to three or four miles.

I know how to employ an M113 and how to fight out of one. I've traveled many miles in one of those things. I don't see any way of using it in a police role, unless you dismount the machine gun and use it to protect your SWAT team. Other than that, it's more liability than asset. And, there are better vehicles for protecting SWAT teams that don't cost nearly as much to maintain.

Cool toy, but still. The problem becomes; how's he going to use it to keep people safe?
Posted by Pawpaw at 5:52 PM