It's five a.m, Monday, September 1, 2008 and I'm up, drinking coffee, and looking at the predicted eye path of Hurricane Gustav. There is general agreement that New Orleans might have dodged a bullet this morning. It appears that Gustav didn't strengthen significantly yesterday in the northern Gulf, and while it is going to come ashore as a major storm, it isn't a hundred year event. It's just your average, run of the mill hurricane.

Some disagreement still exists about the reported strength of the storm, but that's probably because it's hovering on the boundary of levels 2 and 3. The track of the storm is such that the eye of the storm will come in near Houma, LA, and cross southwest Louisiana on a northwesterly track. Accuweather shows it here: 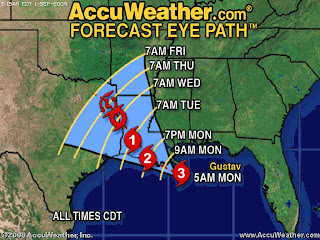 while the National Hurricane Center map looks like this: 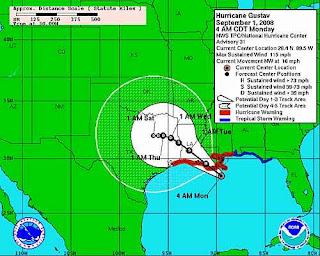 So, it looks like it's going to make landfall near Houma, and cross into Texas over Toledo Bend, a large lake on the western border. All of Louisiana is going to feel the impact and the only divergence of the models is how fast it will lose strength and disperse. This is still a large storm and we in central Louisiana are still expecting to feel its lash.

Outside on my driveway this morning, the concrete is still dry and the wind is calm. As I type this I'm not hearing the wind chimes that still hang on the back porch.

One thing the models don't show is the turn that most hurricanes and tropical storms make to the north and northeast as they come ashore and start to lose strength. It's been my experience from years of watching hurricanes, that most of them turn after making landfall. Rita did it, Katrina, Camille, Audrey, most of them turn to the right (to a more northerly or northeastely course) after landfall and while they're dying. I'm no weatherman, and I'm sure that the scientists today understand steering currents more completely, and I hope they're correct about this storm.

Still, we're hunkered down waiting for the worst it can bring. All of Louisiana is waiting for this storm and we'll see it later this morning and this evening. Today should tell the tale.
Posted by Pawpaw at 4:49 AM

Email ThisBlogThis!Share to TwitterShare to FacebookShare to Pinterest
Labels: hurricane

...and Gustav is turning, almost due west as the northern eyewall hit shore near Houma. It might continue on that path, and the eye parallel the shore, and maybe even go back out to sea and bedevil the TX coast at Tropical Storm level for several days. One of the computer models shows that happening, and it seems that the 'cane's current path is most closely following that model.