I was wrong yesterday about the Ike graphic. It gets better. Look at this thing!

The National Hurricane Center says that this is a big ole storm, and that its physical size doesn't add up to the numbers. The wind speed isn't particularly fast, but the storm is huge. The public advisory says this:

IKE IS MOVING TOWARD THE WEST-NORTHWEST NEAR 10 MPH...17 KM/HR...AND THIS MOTION IS EXPECTED TO CONTINUE FOR THE NEXT 24 HOURS...WITH A TURN TO THE NORTHWEST EXPECTED LATE FRIDAY. ON THE FORECAST TRACK...THE CENTER OF IKE WILL BE VERY NEAR THE UPPER-TEXAS COAST BY LATE FRIDAY. HOWEVER...BECAUSE IKE IS A VERY LARGE TROPICAL CYCLONE...WEATHER WILL DETERIORATE ALONG THE COASTLINE LONG BEFORE THE CENTER REACHES THE COAST.

The satellite image shows it covering a sizeable portion of the Gulf of Mexico. Lookee! 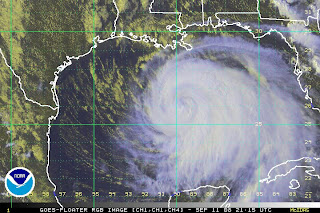 That's one big storm, children. I bet the storm surge will start impacting the coast sometime tomorrow.
Posted by Pawpaw at 4:41 PM

NOAA weather-guessers now saying a storm surge of up to 25 feet in Galveston Bay. I was down there this spring, and that's going to wipe out the city if that happens. The sea wall is only 17 feet, and land behind the sea wall is much lower. In fact, there is a LOT of land between Galveston Island and Houston well under 15 feet, and the Houston Ship Channel will funnel all that water inland and flood HUGE areas. Those areas contain a LOT of refineries, and NASA's huge facility.

Pray for Galveston, and hold on to your wallets, fuel all over the South will go up smartly in price.