One of the continuing challenges of rural America is internet access.  The gold standard is cable-type Inernet, but other options exist in local markets.

Here where I live, we are served by Optimum, a cable company who provides TV, internet, and residential phone services.  We used to be served by SuddenLink, but they went away several months ago, and Optimum is the name on the building today.

Optimum sends me a bill each month.  A big bill.  I had been using my cell phone as a local hotspot for internet services in the shop but wanted something better.  The hotspot has a data limit, and when I reached that limit, they would throttle it dramatically.  So, I went down to the local Optimum office to see if I could get internet access in the shop.

I went in on Thursday, Oct 13, and they told me that someone would be out on Friday, Oct 14 to assess the work.  hung around the shop all day and never saw any cable guys, so on Monday I called the company.  THey told me that their guy had been here and said that it was impossible to put internet in my shop because it was over 300 feet from their access point.  Odd, that/

So, I went back to the store on Tuesday, October 18th.  They told me that someone would be out of Thursday, Oct 20, to re-evaluate. I stayed at the shop all day yesterday, and even made jokes about it with friends and family who dropped by, asking if they had seen a lost cable guy.  No one showed up.  So, this morning, Oct 21st, I went back to the store.  The woman at the store, who has been very helpful, checked the computer and told me that someone had come out yesterday, and said that the local access point is over 325 feet from the shop.

That is very odd.  I checked the acess point on the pole with Google maps, using the same access route that our local electric company used to put power into the shop.  It measured at just over 192 feet. 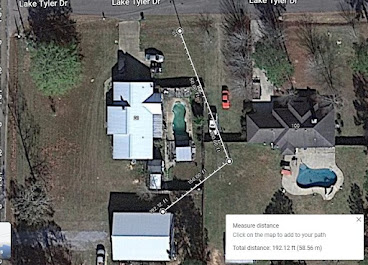 They are supposed to send a supervisor out later today.  We'll see.

I have wireless internet from a local company, from a tower about a mile awayat our new place, because the location here has a direct "line of sight", but our old house didn't. When he was installing it, the tech told me for about $400(pre covid, pre-Biden dollars) we could BUY a transmitter and receiver to send our internet down to the old house. no extra monthly bills, we would own it. We never got one, but you might look into that as an option.

i don't live in the sticks but yet i live in the sticks...my options are line of site dishes or direct/dish of that nature...so yes, rural net sucks...i would check to see if there are any line of site companies in your area if you haven't looked that route yet...i get 100 megs down and 20 up...not ad for a tiny dish on my roof...

Sounds like they are blowing smoke up your...southern region.

Field guy did a drive-by at best.
Amazing what counts as 'customer service' these days. Here you are banging down their door trying to give them more of your money....
Judging by the photo you could put a WAP (Wireless Access Point aka wireless router, 60 bucks at chinamart) to act as a bridge. Worst case you would have to get a 2nd one installed at the shop.

Get a good point to point bridge setup from the house and a decent ap for your shop and call it a day. Save the monthly nut of an extra cable bill.