Meet the senators in Louisiana who voted against their constituents wishes and went with the Governor on Constitutional Carry. 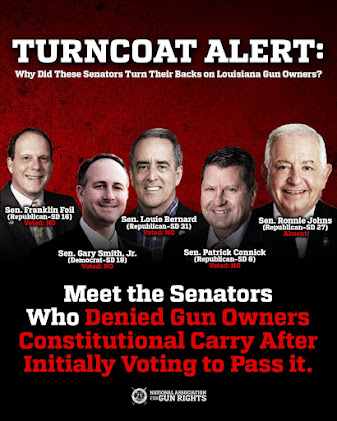 It was a brazen ploy.  They voted for the bill in the regular session, suspecting that the Governor would veto it, but they could go home and tell their constituents that they voted for it, and make the Governor the bad guy.  But, the people of Louisiana demanded a veto session, and the Constitutional Carry bill failed by two votes in the Senate.  We will never know if it would have passed int he House, because these Senators voted against it.

I don't know why Louie Bernard voted against it, but I always thought that he was a stand-up guy.  I know now that I was seriously wrong about him.

Judas John , on the other hand, didn't even bother to show up for the vote.  He had knee surgery a couple of weeks ago and claimed that his doctor wouldn't let him attend.  That is a flimsy excuse.  What we do know, and was confirmed by the Governor, is that he is the lead candidate for the State Gaming Board.  Judas Johns should remember that he has to be confirmed by the Senate, and he has pissed off a bunch of Senators.

These five guys are despicable.

Such nice smiles, the lot. Bet they have a nice firm handshake, too. But then have now shown what's in the hand behind their back.

You are absolutely right on this. Watch the Dead Pelican and see who gets an appointment or other reward