Some good news coming out of the Tokyo Olympics.  It seems that Amber English, who is a US Army officer, has won the gold in Women's Skeet.

English, who narrowly missed out on qualifying for the 2012 and 2016 Olympic shotgun teams, prevailed by one target over the reigning Olympic champion Diana Bacosi of Italy. She set an Olympic record by hitting 56 of 60 targets in the event. 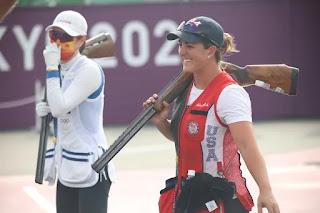 International skeet differs from American skeet in that the targets are a tiny bit larger, and they fly a bit faster.  The course of fire is also different, in that more doubles are shot, and there is no "option" shot in International Skeet. In International Skeet, it is entirely possible to drop a target simply because you didn't see it.

A round of skeet is 25 shots.  This indicates to me that the match was two rounds, plus a soot-off.

My first game in the shooting sports was American Skeet.  I shot it as a striping youth at the old McBride Rod and Gun Club at England AFB, LA.  I was employed there as a skeet boy at age 12 for the princely sum of 50 cents per hour.  At the end of he day, the skeet boys were allowed to shoot one round of skeet, free of charge.  It was part of our salary.

Skeet has been eclipsed these days by 5-stand and Sporting Clays.  You can find a layout of a skeet field here.

Also, in International Skeet you must start with the shotgun down under the elbow rather than shouldered. Makes for a sporty proposition given the increased target sped compared to regular skeet. I watched LT English's win on TV. The camera couldn't catch the bird's flight but the pink puffs were satisfying to watch.