Evidently, the 2.2L engine on a 90's era Isuzu Rodeo is an interference engine.

What that means is when the timing belt breaks and it jumps time, the pistons come up and total the valves.

No, I haven't pulled the head.  But, I'm betting that there is lots of damage in there.  I had that same problem on an '80s era Ford Escort.  That vehicle was new enough to rebuild, so we took it down.  When we pulled the head, every valve was bent and three pistons were holed.

I've seen this dragon before, and it's a beasty beast.  I don't know if that engine is worth rebuilding.

Here's the little bastard that wrecked the engine. 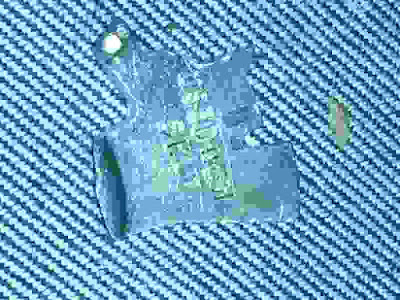 Tiny little piece of steel, it's part of the timing belt tensioner.  Evidently, though vibration or fatigue, it broke loose, fell into the timing belt, threw the engine out of time, and in 1/2 a second, had ruined the engine.  It's a trifling little part, but the aftermath was catastrophic.

Most likely the damage is confined to the head. I never saw one damage the pistons and this is a job I did a lot of back when I was twisting wrenches. If you do decide to fix it be sure and replace the water pump.

It can indeed damage the pistons. I had it happen to a 1984 Ford Escort. Not exactly one of their prouder moments of design. My first new car, I was kind of disappointed in Ford, as you might imagine.
I bought a 1990 Plymouth Colt, which had a Mitsubishi 1.5 liter engine in it. It got an honest 40 miles per gallon with a 5 speed manual trans. Unfortunately, I was playing music, and also working full time driving 40 miles to work one way, and put 80 k miles on it in 2 years. Ended up trading it off for a different vehicle to haul my new wife around with all of my kids so we had more room.
I did have a 302 Ford engine from the 80's with a broken piston skirt embedded in the cylinder wall that was still running when I tore it down. Not running well, but running.