Rainy Day out at Thorn Valley, but we have an indoor range, and we're lucky in that regard.  Some pictures from todays practice.  All names are CFDA alias. 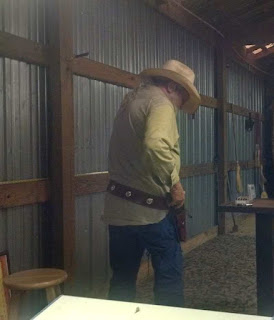 Silverside, making ready.  That's lane 1 of our range, hard against the wall of the barn.  I never do well on lane 1, so I try to avoid it.  Other folks like it, and that's fine. 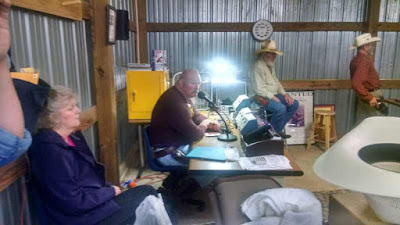 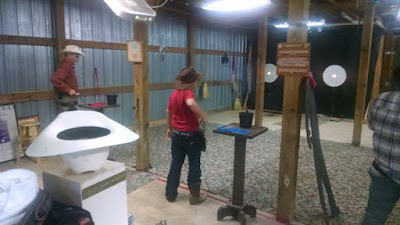 Sinister Sal and Akarate Zach coming out of the holster on the light.  That fellow on the far right in the checkered shirt is Rebel Yell.  He was trying out Big Mark's long gun.  Hitting good with it, too, after he learned to get that long barrel out of the holster.  He was hitting in the 6s quite regularly, and that's pretty durned good for someone who is first trying a long gun.  In our sport, a long gun is a revolver with a 7.5" barrel.  Most shooters like the 4.75" barrel, it's easier to drag out of the holster.  That long barrel is a challenge all its own. 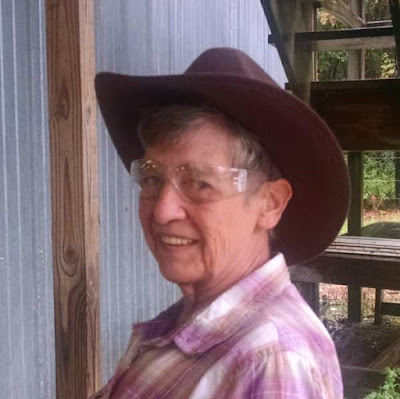 That's Milady.  Her CFDA alias is Blue Eyed Belle.  I didn't get a photo of her on the line, but several of us were sitting outside jawing, and I caught this photo of her.

All in all, a great practice.  We're ensconced at home now, watching it rain and scratching the dawg.  About 7:00, we'll flip the channel to the LSU game
Posted by Pawpaw at 3:58 PM

Indoor ranges are nice! The extra noise, not so much...sigh