Never Seen That Before

Playing with the grandkids in the yard today, we wer e doing a little wax bullet work with Milady's Ruger New Vaquero.  I bought that revolver for Milady back in March as we began our Fast Draw game and we've been very happy with it.  When she bought her Liberty Model, the Ruger became a back-up, a spare gun, and it rides with us everywhere in the spares bag.

After the girls finished shooting, as we were clearing the revolver and the range, I happened to touch the front sight and it wiggled.  Wiggled.  I handed the revolver to my son, and he looked at it, then pulled the sight from its slot.  "Looks like the solder turned loose, Pop." 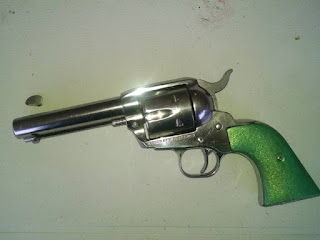 I've seen a lot of things, but I've never seen a front sight turn loose.  That gun has never fired a single round of standard ammunition, has been exclusively a wax-bullet gun.  I guess I'll box it up and on Monday, call Ruger.  It looks like a trip to the shop is in order.
Posted by Pawpaw at 5:23 PM

Hell, it's not like you use the sight. It'll just come out of the holster faster, now! 😉

Did it lose a rollpin. Never heard of a soldered sight on a revo before. They are usually pinned with very small roll pins.

They used to be silver-soldered, and the fast way to adjust windage was with a pair of pliers.

It wonders me, was it silver soldered, induction welded, or pinned?
I have an extremo el-cheapo Hawes Western Sheriff .22 about the same size as the Ruger Single Six with a 5' Barrel. The front sight was gone when I acquired it. It had been held in by four staked dents in a slot in the pot metal barrel, (the barrel is lined with a rifled steel tube). I made a replacement from a piece of mild steel flat bar. I glued it in the slot with JB Weld about 30 years ago and it's still holding. That revolver has gotten me laughed at for 30 plus years. Until I start shooting it. That POS; I paid $40 for is more accurate than a "real" Ruger Single Six with an adjustable sight a good friend has. Gus are weird people, you just never know when you're going to get a winner.