We were busy yesterday out at the club, shooting and visiting with friends.  We got home and I trimmed the leftover ham from Thanksgiving while Milady put put some great northern beans in the crock pot.  This morning, Milady took the ham I had trimmed and diced it to add to the bean pot. 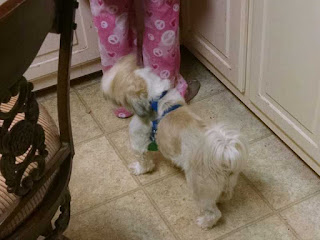 The dog, of course, is hoping something will hit the floor.  I suspect that Milady gifted him some trimmings.  The menu today is white bean chili with cornbread or crackers for those so disposed.

White bean chili has become one of our choices when we're feeding a bunch of people.  Generally it's made with chicken, but we had a pound or so of ham left over, so we decided to experiment a bit, to substitute ham for the chicken, and see how it turns out.
Posted by Pawpaw at 7:28 AM

Email ThisBlogThis!Share to TwitterShare to FacebookShare to Pinterest
Labels: family, food, the dog

I read your recipe. How did the chili turn out?