Murder rates seem to be one of the topics of discussion this year, and there's a lot of bad data floating round out there.  One that I saw recently on Facebook, for example, attributed to various sources (including the Trump campaign).  There's a lot wrong with this graphic, so let me point out a few things that you might consider. 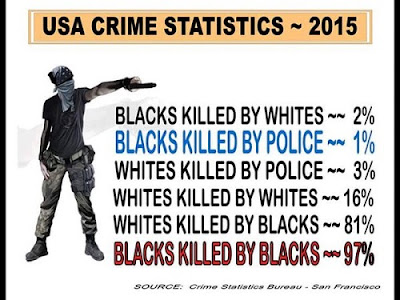 The first and most obvious problem is that no one has murder stats for 2015, because 2015 isn't over yet and won't be for another month.  And, the murder stats for 2015 won't be available for another year or so, because those cases have to be completed before they can be put in a database.  Others have pointed out that the graphic is sources to the Crime Statistics Bureau of San Francisco, which simply doesn't exist.

But, there is a bureau that keeps these statistics, and they have data from 2013, which makes sense.  Let's take a look at the FBI data, shall we? 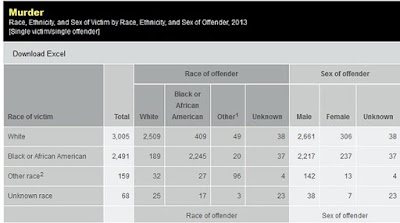 Those are the best numbers that the FBI ca give us,  Murder is a messy business, and it takes serious people to put together a chart like that.  Still, those numbers can tell us a few things.  Like, for example, that some races can't be characterized.  And, that we're fairly tribal.  Most whites are killed by whites, and most blacks are killed by blacks.  That makes sense as well, simply because murder is generally an up-close-and-personal affair.  Yes, there are random murders, but speaking in broad generalities, most murder victims know their assailants.

Jazz Shaw does a good job of analysis at Hot Air, discussing proportionality, and I'll leave you to jump over there are read his analysis, but I'll leave you with this thought:


In the end, there was some truth on both sides, but if we are to be honest in this political debate we have to stick to the facts. That chart was wrong pretty much across the board and wildly so in a few categories. There’s no harm in having this debate, no matter how much the feelings of the SJW may be hurt, but we should at least rely on accurate data.

No, the original chart isn't wildly inaccurate, but it has enough problems that you shouldn't rely on it.
Posted by Pawpaw at 6:51 AM