The Ruger Vaquero is the cowboy gun of the Ruger single-action lineup, and it's a very capable revolver.  They're used a lot in Cowboy Action Shooting and they're also used a lot in Cowboy Fast Draw.  We've been spending some Saturdays with the local fast draw club, and since Milady's birthday is later this month, I figured that she needed her own revolver, suitable for the cowboy game.  Today, I picked up a Ruger Vaquero, in .45 Long Colt. 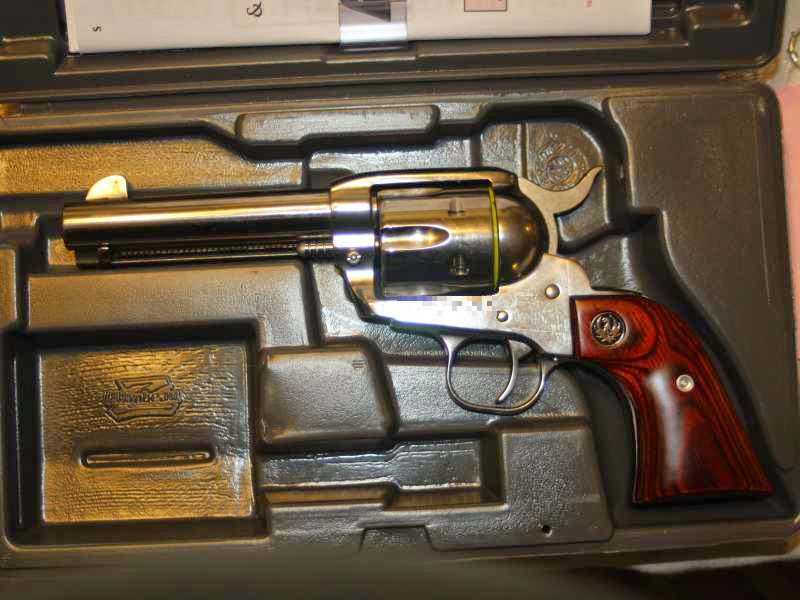 Now, she's got her very own fast draw rig.  We'll have to do some practicing, as soon as the special ammo shows up on the Brown Truck.  But, because it's wax bullets and shotgun primers, we can do that practicing in the back yard.
Posted by Pawpaw at 4:59 PM

Nice guns! And your link is broken- Should be http://www.cowboyfastdraw.com/

Years ago I owned a 5.5in Ruger Vaquero in .45LC. It was a beautiful gun and a sweet shooter. That being said it was a huge single action revolver so it had no utility in my battery.

Traded it and a few bucks for a Taurus model 66 6" half lug .357 mag. That gun is a tack driver. In college every weekend or so I would drive up into the mountains with a box of ammo. Putting 5/6 rounds into a 6" rock at 50 meters was a common occurrence. Taurus has certainly made their fair share of duds but the one I got is a total stud. It is as close to a 'point and shoot' handgun as I have ever handled. Would carry that wheel gun into any situation...

Down the road I wouldn't mind purchasing a Vaquero in .357. It would be fun to shoot and own. A stainless one would make a pretty decent woods walking revolver.