Regular readers know that I've been handloading rifle and pistol ammo for several decades.  With cast bullets, fit is king.  A bullet that is properly fitted to the bore is more likely to shoot accurately.  T his is not news and is well documented.

Recently, Milady and I started fast-draw shooting with the good guys down at the Lucky 4B Ranch.  This is also not news to regular readers, but the old handloader in me started pondering the things that handloaders ponder, and I started thinking about wax bullets.  When we started shooting, I bought a bunch of the E-Z loader wax bullets, so that's what I have to work with, and they load easy in the casings and they seem to shoot just fine.

Folks have asked me, "Don't you get wax in your barrel?", and I guess I do, but cast bullet shooters have been coating bullets with wax or grease for hundreds of years.  They call it lube, and you're crazy to shoot an un-lubed bullet down your barrel.  In this case, the whole bullet is lube, and I haven't noticed any real fouling to speak of.

But I was concerned about the bullet catching the rifling, and because the bullets normally shatter when they hit the steel target, so I didn't find any bullets that I could examine.  On Sunday, though, I was letting the family shoot and one of the grandkids shot and missed, and I saw the bullet rebound off the 4X4 fence post nearby.  At the first opportunity, I found it in the grass and looked at it.

Those bullets mic' about 0.447 and we all know that the bore of a .45 Long Colt calls for a 0.452 bullet, so I was concerned about the bullet catching the rifling.  I knew that the shotgun primer that propelled the wax bullet was fairly low pressure, as pistol ammo goes, but I didn't know if that primer had enough energy to obdurate the bullet in the bore, provide a good seal, and give the bullet stability. 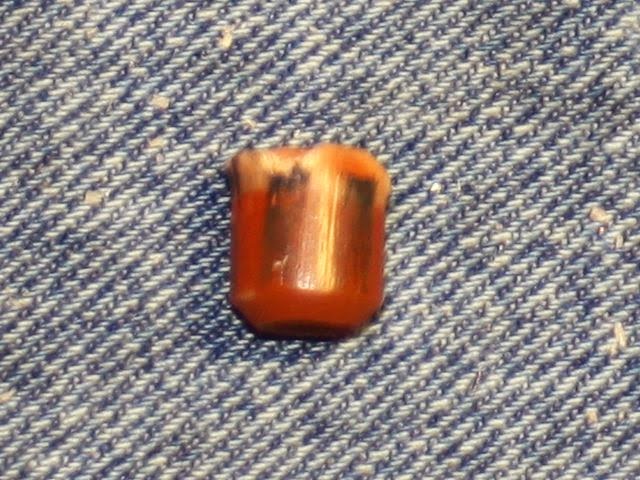 Clearly, more study is in order, but I'm sure I'll have time to study those questions.
Posted by Pawpaw at 5:00 AM