It seems that yesterday while I was working, a good cop in Boston was injured in a shooting.  This police officer, John Moynihan was honored in 2013 at the White House.  He received the Top Cop award for his role in Boston Marathon manhunt.  Evidently, he was on a traffic stop yesterday that went bad.


The situation began when officers with the city’s Youth Violence Task Force pulled over a vehicle near the intersection of Humboldt Avenue and Ruthven Street, Evans said. As officers exited their car, a man in the pulled-over vehicle got out and opened fire.

Officer Moynihan took a bullet to the face, and he's in critical condition at the hospital.


Evans said in a news conference at the hospital Friday evening that Moynihan was responsive when he first arrived. The shooting occurred around 6:40 p.m.

“But he’s in... basically an induced coma at this time and they’re examining the extent of his injuries,” Evans said.

The guy that opened fire was killed at the scene.

So, let's review.  The cop makes a traffic stop, the guy gets out of the car and starts shooting.  One cop critically injured, the shooter dead at the scene.  Of course, the shooter happens to be a black guy, so the Twitter-verse explodes. 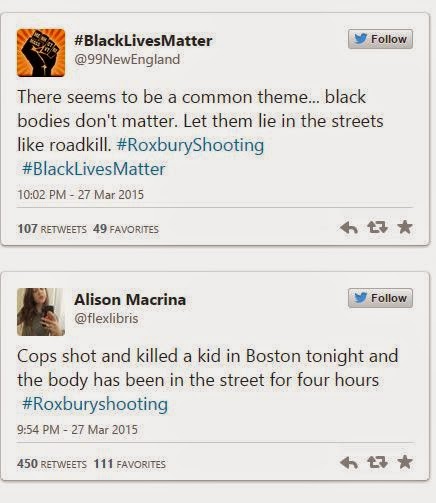 I'm sure that the police were moving slowly, getting it right, collecting evidence, documenting the scene.  As the scene unfolds for us, and we learn more about the shooter, I'm sure that we'll learn who he was and more about his history.  I'm sure that he'll be portrayed as a choirboy with a shining future who was brutally murdered in the streets by the racist Boston Police Department.  All information that doesn't trumpet this line will be suppressed and will trickle out slowly.

I'll be praying for Officer Moynihan, along with the others on my prayer list.  While I'm at it, I'll also pray for the leftist Twitter users who are first to portray the police as murderous racists.  Those people make me sick.
Posted by Pawpaw at 7:47 AM

Thoughts and prayers for him from my end. Screw the twit-idjits...