A Pile of Bullets

I decided this morning to clean off my work bench, cluttered with the things that projects and grandkids can put on an open bench. While cleaning, I noticed that I was almost out of lead bullets for the .38 special, so I took down the lead pot, plugged it in and dropped some ingots in it.

Began casting my favorite revolver bullet, the Lee TL358-158 SWC bullet. After about 60 bullets fell from the mold, the pin holding one of the blocks came loose and dropped the half of the mold block. Well, damn! 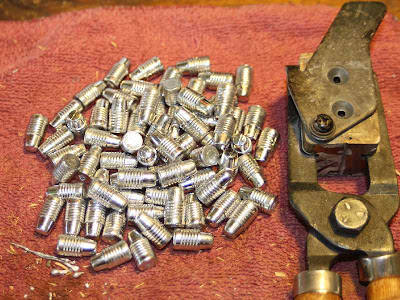 Then I remembered that several years ago, a friend had given me a mold block for that same bullet, only in round-nose, the Lee TL358-158RN bullet. I found it in my stack of mold blocks and continued casting without missing a stroke. I emptied the pot, loaded it again, and continued casting until I ran out of enthusiasm for the process. 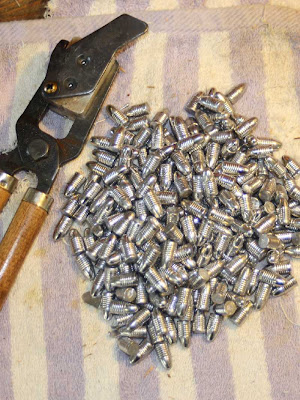 I didn't count them, but there are several hundred there. By the time I finished casting, that first mold block had cooled, so I reassembled it and staked the pin into the aluminum block. In another hour or so, I'll coat those bullets with alox and spread them on waxed paper to dry.
Posted by Pawpaw at 12:07 PM

I've seen stuff on the net about another run on ammo, and components with the upcoming election, almost with anyone who wins. What do you think? I think if Obama wins, yes it could be bad. I don't really know with Mitt or the others.

I'd be curious to know what you thought.