Back in my mis-spent youth, I was a Boy Scout and during my later years, became part of a society known as the Order of the Arrow. I was inducted into the Order as a youth and became very active in the lodge during my late teens and early 20s. After moving away, growing up, and having children of my own, I got involved in Scouting again and was a Scoutmaster for a troop of boys in Natchitoches, LA. I'm very proud to say that during my tenure, we made 12 Eagle Scouts in the course of four years.

My first Lodge, my home Lodge, was Ouxouiga Lodge, #264 and when I came back to central Louisiana I found that it had been absorbed into another lodge during a Scouting re-organization. Old Ouxouiga Lodge no longer exists, but a number of us old Scouters have memorabilia. 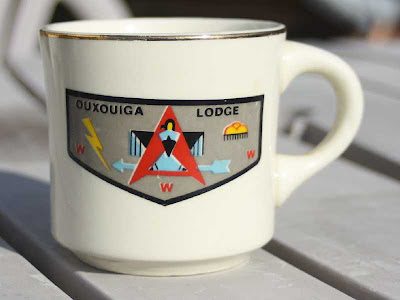 Earlier this week, a fellow that I remember as a kid called me. He's doing research on old Ouxouiga and is picking the brains of old Scouters. He wanted to come by the house and interview me, and I told him I'd drag some stuff from the attic and we'd talk. 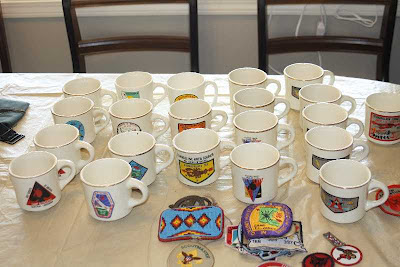 I've gone into the attic and found the box with the memorabilia. Cups, patches, pins, old stuff I'd forgotten I had. The kid will be here at noon and we'll spend an hour or so walking through memory lane.
Posted by Pawpaw at 9:32 AM

Email ThisBlogThis!Share to TwitterShare to FacebookShare to Pinterest
Labels: Scouting

I have grandpa gus's beade OA sash and Ouxouiga black Lodge flap, in case you were wondering. They're safe. One day, your grandson will inherit them.