I went to the range this morning, trying to decide between two rifles as my primary hunting arm this year. I've got to make a decision and it's getting tougher by the day.

The first rifle up is a Remington 700 ADL, made in 1983. I like this rifle, it's got classic styling and it shoots very well for a hunting rifle. When I'm at the bench, it shoots into about an inch at 100 yards and it has turned in some nice groups for me. The best it's turned in was a tiny 0.58 inches from the bench, giving the rifle every advantage I could give it.

I didn't use a benchrest. I wanted the rifle recoiling from my hands, with the Leupole VX1 set at 6X, center of the power range. Surprisingly, the rifle shot to about the same point of aim as it did from the bench, about 2" high at 100 yards. The group size opened up to a disappointing 2.2 inches. 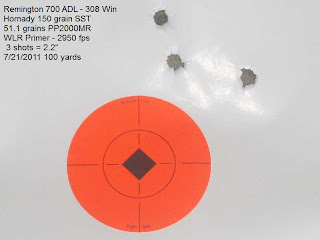 Did I pull that shot to the right? I don't know, I might have. It was the third shot of the string. We'll never know, but that's not bad hunting accuracy, shot off my hand. Frustrated with the group, I turned my attention to the 300 yard gong and put two shots into it. That gong is a 12X12 piece of armor plate and I rang it with the rifle, shooting off my palm. That rifle and load is certainly capable of taking a whitetail deer at any reasonably yardage.

Next up was the Savage 10, also in .308. The load I use for that rifle is my pet load of 43.0 grains of Reloder 15 and and a 165 Gameking bullet. I repeated the cold bore routine, and this rifle shot differently off the bench than it did from my palm. The first shot on the target went low and to the left, which isn't uncommon for some rifle. From a benchrest they shoot to one position, from a hunting position, they shoot to another. So, I adjusted the scope and walked down to the pistol line to do some 25 yard work. I came back and fired one shot, then walked back down to the pistol line. At the end of the string I looked through the spotting scope and saw a nice little triangle group. Not too shabby for a rifle I rescued from a pawn shop. That group is well under an inch, so in celebration I moved my aiming point to the 300 yard line and rang that gong again. Now, I've got to make a decision.
Posted by Pawpaw at 2:05 PM