A month or so ago, I ordered powder. Haz-mat charges being what they are, I normally order several pounds at one time. The dealer had a new Alliant powder in stock, Power Pro 2000 MR so I decided to order a pound to see if it was any better than what I'm using in the .308 Winchester.

My .308 Winchester load uses Reloder 15 powder. Over the years I've gotten very good accuracy from RL15 and intend to keep using it. Indeed, one of the powders I ordered was a 4 lb jug of RL15. Still, I wanted to try the new powder because the Alliant company made some pretty fantastic claims about this new powder. When the powder order came in, I put the pound of the new powder on the shelf and forgot about it. This past weekend I decided to get it down and look at it. Alliant claims it's a spherical powder, but when I poured a little on a sheet of paper, it didn't look spherical. It looked like spherial powder that had been squished. 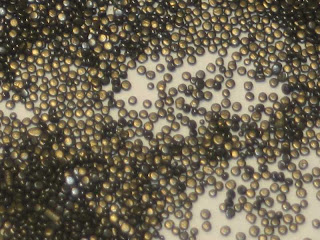 It's a shiny black color. I think that those gold-tones in the photo are artifacts from the flash. One of the claims that Alliant made is that new powder would push a 150 grain bullet to 2950 fps. Bullshit, I thought, that's .30-06 terrority. But, I had a box of 150 grain Hornady SST bullets and some match brass, so I prepped 24 cases. I loaded them in 0.3 grain increments from 49.3 to 51.4 grains and seated those 150 grain bullets to the SAAMI length of 2.800".

This morning I went out to the range and set up some 100 yard targets, then put the chronograph on the tripod. I sat down at the bench and started shooting. My Remington 700 has probably the longest lede in modern history. Bullets seated to the SAAMI standard length are no where near the rifling, so it's a pretty good jump to the lands, especially with those short 150 grain bullets. Group size wasn't quite as good as my Reloder 15, 165 grain load, but I noticed that as I increased the powder charges, the speed of the bullet increased quickly into what we normally see for .30-06 loads. I've made a handy-dandy table. 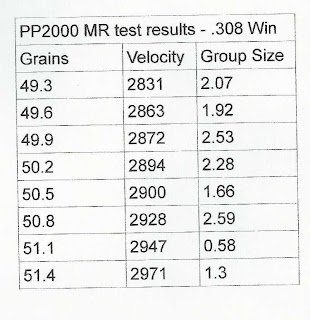 Then, when I got to 51.1 grains, something magical happened. All three shots touched. When I measured it later, the group size was just a tiny 0.58 inches. 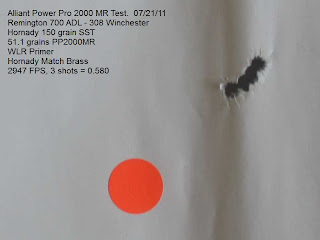 Is that a fluke? Did all the stars align? I don't know. The following group, the fastest one I shot, measured a more rational 1.30 inches. You have to remember, this is a hunting rifle, just like it came from the factory. I haven't even floated the barrel.

That last 3-shot group sizzled across the chronograph at a smoking 2971 fps. The group opened to a classic 1.3" triangle. I looked at the primers and found nothing untoward. No flattening, no cratering. 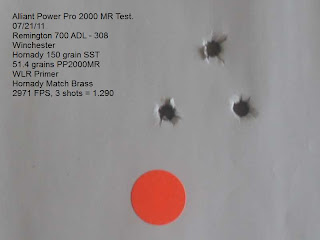 I wonder if the increased velocity would carry over to 165/180 grain loads. High country elk hunters might like a light short action rifle to carry in thinner air which duplicates or exceeds a 30-06.

I might try 165 Gamekings next, but with increased velocity comes a penalty and that's increased recoil.

Now you've got me thinking...

Going where no powder's gone before, eh?

I'm sure it's under SAAMI max, but by how much?

I don't know, I haven't seen it on a powder burn rate chart yet. But, I'm impressed. The bottle says it's made in the USA, so it must be a St. Marks spherical powder. I don't know of any other powder manufactory in the US.

I believe that this is the same powder that Hornady is using for their Superformance line. I'm getting numbers that nearly match theirs. They're probably using a longer barrel than mine, but I'm touching high 2900s and I've not gotten to the max load yet.

Rivrdog asks: If it's this good with the 150s at short ranges, it looks like maybe it could carry a 180 out to 7-800 yards supersonic.

I don't know, Dawg, but I ran it through my ballistics program using Alliant's numbers and if my program is anywhere near correct, then it'll push a 178 grain A-Max to 2750, and it'll still be cruising at 1425 when it crosses the 900 yard line. YMMV.

Not sure when this blog was written, but have tried this powder with your 178's yet? I'm curious. What was your ES, SD's?
Thank you,
Tank

Guys, I have been using this power pro 2000mr for about a month. It is pretty good to great for getting higher speeds and consistent batches. I am using between 50-51gr for 155gr bullets at about 2835fps and 47.1gr pushing 175-SMKs to 800 yards supersonic. Switching to Tipped 175s will keep me Mach1 to 1000yards.