This morning I finished a long awaited project with the assistance of two grandsons. They were more help than they know, fetching tools, holding wires, helping me with odds and ends in the project.

Several months ago, Milady brought me a lightbar from the collection of an old friend. He said that he was never going to use it, and that it had come from the police car formerly driven by the Chief of Police for Pollock, LA. For these past several months I've been scrounging parts, like the box to hold the wiring and a switch box to control the various lights. 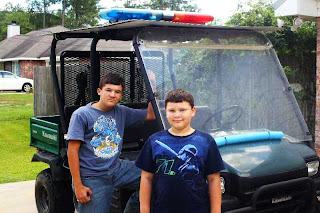 This morning the grandkids and I installed it. It's got the main rotators, takedown lights, front wigwags and rear wigwags. It doesn't have rear white lights or alley lights, but I can live without those features. I think that it is Double Plus Awesome, and the grandkids seem to like it as well.
Posted by Pawpaw at 12:56 PM

Cool project; just the kind that some "boys" needed to do together!

Congratulations on having the coolest Kawi Mule in Cenla.
LMAO