I was at the range the other day doing some pistol work and was approached by a volunteer. We'll call him Bud, and he walked over to where I was shooting and asked about cast bullets. He asked if I ever had any bullets that I culled for any reason. Bullets that just didn't meet my criteria. I told him yes, but also that any culls I might find went back into the pot to be made into good bullets. Culled lead bullets don't last long on PawPaw's bench.

He stood around for another minute, and I could tell that there was something on his mind, and I asked him what was bothering him. He told me that he's sponsoring and coaching a high-school muzzleloading team and they're looking for bullets. He's got a bunch of .50 caliber sabots that hold .45 caliber bullets, and the league rules allow sabots, and he was hoping that I'd have some bullets that I might not use and would donate to the team. The team is on a shoestring budget and he's got to buy powder and caps and...

I told him that hell, yes, I could donate some bullets. He told me that any good .45 caliber bullet would work. At the time, he was holding one of my .45 reloads that use the common round nose lead bullet and he thought those would be just fine.

This morning while it was raining, I took down the lead pot and heated it up. Inside of an hour I had cast about 250 good bullets. No culls here. 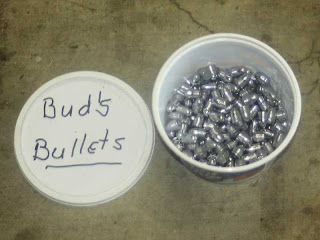 That little tub should get them started. If they shoot well from his muzzleloaders, I'll cast him some more. I know what it's like to support a kid's team on a tight budget.
Posted by Pawpaw at 10:11 AM

Nicely done Sir! I KNOW that will be appreciated.

good for you! It's rewarding to help young ones along.

Paying it forward. Good done for the kids may well pay dividends for years to come.

I've got some 200 gr FRN bullets that I won't ever use (probably a couple hundred)along with some 230 gr TCs and some 300 gr. WFNs, all in .451 diameter. If you want, I can send some of each your way, if the kids want to experiment a little.

Also, somewhere around this dump, I THINK I still have a 250 gr. SWC gang mold from Lee, that only needs a set of handles. Drop me an email if you think the kids could use any or all of the above.

Thanks for taking the time,