I took my Winchesters to the range today to sight them for the hunting season, and to get some new chronograph data for the loads I like to use.

My favorite cast bullet load in the .30-30 is the Lyman 311041 bullet over 27.0 grains of IMR 4895. Some days I shoot that load very well, some days I can't hit the side of a barn. Today was okay. I fired thirteen shots at the target, measured every one of them. That 170 grain cast bullet is going an average 1930 fps. I shot seven shots, then adjusted the sight to bring the shots up to the bull. Then shot 6 more shots 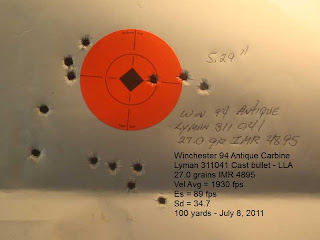 Another load I like in the .30-30 is the little Speer jacketed 130 grain flat nosed bullet. I push it with Reloder 15 to about 2175 fps from my Synthetic Model 94. I fired two, 3-shot groups, hovering that 3" dot over the front sight. After the first 3 shots, I increased the elevation on the front sight and you can see two distinctive groups on that paper. 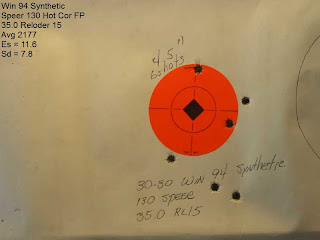 I'm satisfied with that one, too, and I've locked the sights on the rifle. Anytime I can shoot into the area covered by the front sight, I feel I'm doing well.
Posted by Pawpaw at 12:30 PM