Controlled Flight Into Terrain is an aviators term to describe something that has gone horribly wrong.  One exmpple might be an aircrft flying into a mountain.  Horrible fireball, no survivors.

The latest example, Rachel Levinne, the first openly transgendered four-star  appointee.  Identifies as a woan, still has his nuts. 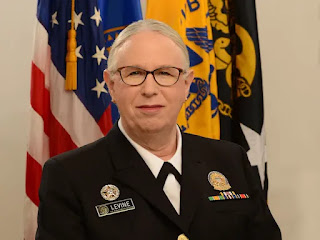 That is what we used to call a drag-queen.  A guy, with penis and testicles, parading as a woman.  And, now flagged as a four-star admiral of the Public Health something-or-other.

A caricature of an officer, put forth by the Biden White House and confirmed by the Senate.  I would likk to thiink that the US Public Health Service Commissioned Officer Corps is more than just a costume party, but it appears that is what it has devolved into.

thought that "CFIT" was "Commie F****-up Incompetent Tranny". This is, of course, the thing that pulled its mother out of a "retirement" home before it sent in SARS-2 infected patients to spread the contageon among the vulnerable. It was a Cuomo understudy. Pulling its mother made it clear that it knew it was committing murder. Is there an aircraft-related phrase for "Murderous POS"?

Sadly true, and yes CFIT 'fits' like a glove...

What an excellent analogy.

I'm conflicted. I think everyone has the right to be gay or whatnot but I don't think that should be openly thrown in the face either. I think we need to separate SEX and State just like we did with Church and State.