The Uberti 1873 Cattleman is a fair reproduction of the old Colt Model P.  Uberti makes a dozen or more models, but the basic revolver, the Cattleman has been around for a while.  It's a staple of SASS and CFDA shooting, well regarded by both organizations.  The basic model has a steel grip frame, color casehardened receiver, and blued cylinder and barrel.

Louisiana, twice per year, has a tax-free weekend for hunting, fishing, and outdoor activities.  It's a 2nd Amendment holiday, and lots of gun shops staff extra people to handle the flood of customers.  Hunting season starts today in this area, in the form of dove season, and lots of guys and gals wait until this weekend to make major purchases.

Out in the woods, near Woodworth, LA, on a forest service road, there is a shop called Boone's Hunting and Trapping.  Mr. Boone has been selling guns out of this shop for years, and he's known to keep a nice selection of the guns that people like.  On the way home from the wedding, we stopped by Boone's as he was just six miles out of the way.  When I walked in the door, I asked if he had any cowboy revolvers, and he told me that he had a few, but that the NICS checks were running behind, about two hours, because of the volume of calls they were getting from Louisiana and Mississippi (which also has a tax free day today) .  Still, I wanted to look at the revolvers, and found this little jewel that begged me to take it home. 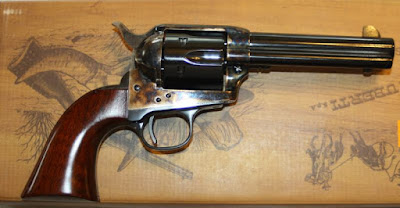 It's the Cattleman Steel, new in the box.  He had several other versions in stock, to include the Hobre and the El Patron, but I went with te Cattleman steel.  That casehardened receiver talked to me. 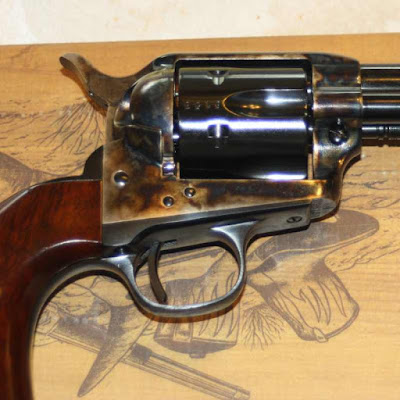 I think that's just as pretty as can be, and while I was filling out the paperwork, Milady fondled it and said that it seemed to fit her hand.  The grips seem to be just a little smaller than both the Hombre and the Ruger grips.  The action is as stiff as a wood fence, and I'll have to do some tweaking, but that's not terribly hard to do.  It will become a spare, I'm sure, just in case we're at a shoot and have mechanical problems with one of the guns.

I told Mr. Boone that I had never had a problem with NICS checks, that when I bought a gun, the problems cleared up and the sale was approved immediately.  He scoffed, and handed his wife the phone.  Within ten minutes I had the gun tucked under my arm and was out the door.  Oh, the price was under retail for the gun.  Any time I can buy for under retail at a local merchant, I feel like I've done a good deed.  The money stays in the local economy and the profit goes to local merchants.
Posted by Pawpaw at 5:52 PM