My son wanted to take a picture of my Single Actions yesterday.  I thought it was a good idea, because even though they're on my inventory, it's a good idea to have a picture for evidentiary purposes in case it's needed.

Every gun I own or have bought to give away is on my digital inventory.  I update it occasionally to note where certain guns are.  For example, if I loan a gun to a family member, I make a note of it on the Excel spreadsheet.

Even so, when I started this cowboy game in March, I didn't own a single revolver in .45 Long Colt. Shortly after we started the game, I decided that two revolvers were simply not enough, and we started modestly adding to the collection as we found a good deal on a revolver.

That's our current battery, and we'll talk about each one, top to bottom. 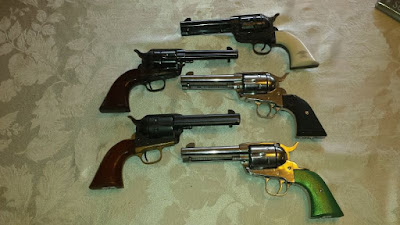 First, we have Milady's new Traditions Liberty edition.  Tastefully engraved with wfite PVC grips, Milady bought it at Bass Pro Shops in August.  When she asked to see it, I could see her face as she grasped the grip frame.  It fit her hand perfectly.  We did a hammer job on it to reduce the force needed to cock the gun, and she's very happy with it.

Second, we have the newest heater in the battery, a Uberti 1873 Cattleman.  I picked it up this weekend from a local merchant.  Yesterday we did a hammer job on it, because the action was stiff as a board fence.  It's much nicer now.  Milady tried it, and announced that it fit her hand as well, and with the hammer job, she can cock it easily.

Third, a Ruger New Vawuero.  This is the first .45 Colt I ever bought.  Akarate Zach shoots it now, until he can get a gun of his own.  I remind him regularly that the gun isn't his, it belongs to me, but he's certainly welcome to use it.  We lightened the cocking force by clipping four coils from the mainspring. Now, it wears Ruger bard-rubber Gunfighter grips.  I still have the rosewood grips that came on it, in case I ever get my revolver back.

Fourth, a Uberti Hombre, with the brass grip frame.  This is my go-to revolver for Cowboy Fast Draw.  This one is bone-stock, just like it came out of the box.  After a couple of thousand rounds of our wax bullet ammo, it slicked up nicely and is the gun in my holster when I step to the line.

Fifth, on the bottom of the photo, is another Ruger New Vaquero.  This one, Milady customized after we gave it a hammer job (by clipping four coils off the mainspring). The gun also sports Ruger hard-rubber Gunfighter grips, but we sanded them down to better fit her hand, and she painted them with fingernail polish before clear-coating them.  This is the revolver she used to win in Odessa in July, and her turquoise grips are known all over the Southern Territory.

I believe that I'm through buying cowboy guns for a while.  We seem to have plenty.  However, my son missed one Single action that I've had for several years, long before I started the gunfighter game.  It's my woods-cruising gun, the Super Blackhawk. 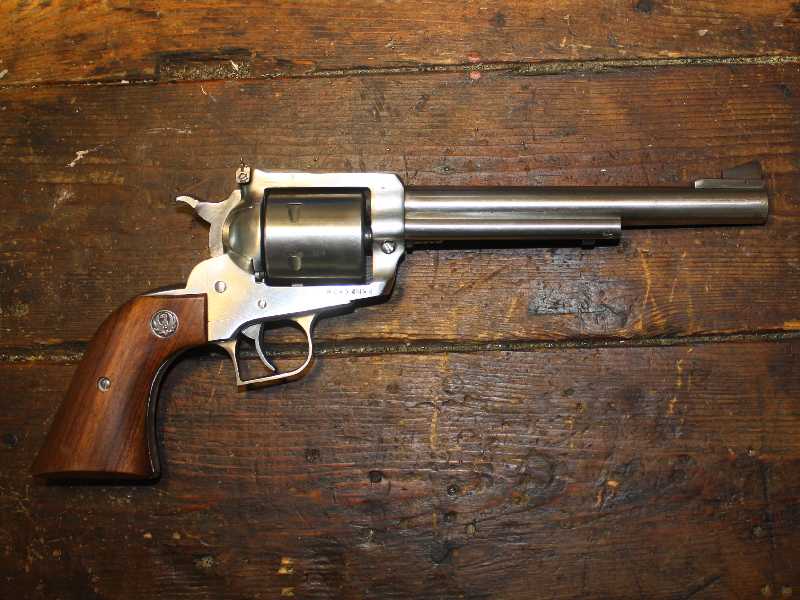 It's barked and roared in the game woods, and it has introduced new shooters to magnum handguns.  It's not technically a cowboy revolver, but it certainly evokes the aura of the late 9th century.
Posted by Pawpaw at 5:00 AM

After looking at them all lined up, i see her secret weapon. The one with the purty grips has a 5-1/2" barrel and the rest are probably 4-5/8".

No, 6shot, the black guns all have 4-3/4" barrels and the two Rugers have 4.62" barrels. I agree that the bottom Ruger barrel looks longer, but that's just an artifact of the lighting or the way they are positioned.

My woods gun is a Ruger super Blackhawk with the barrel cut to 5 1/2" and Magnaported. It will probably be the last gun I own after I have given the rest to grandson.