I built my large deck in 2009 to accommodate my daughter's first wedding.  It's all treated lumber, guaranteed to last fifteen years.  Except if you put a flower pot on the wooden deck.  After three or four years the constant moisture under the deck rots even treated lumber.  A couple of weeks ago, Milady and I learned this lesson when we moved some flower pots and found that the deck underneath was rotted.  So, I had to replace four deck boards and decided that this morning would be a good time to accomplish that task.

At about 8:00 I hied myself to the lumber yard and picked out four nice, 16' deck boards, treated lumber.  I specifically inspected each board to make sure that it was straight and relatively free of knots or other inclusions that would limit its useful life.  I had to go through about 24 boards to find the four I wanted, but I checked out, loaded them in the truck and took myself home.

After ripping out the old boards, I commenced to installing the new boards.  Two of them had warped on the way home, simply from the difference in temp and humidity from the time I took them out of the lumber yard to the time I got them home. 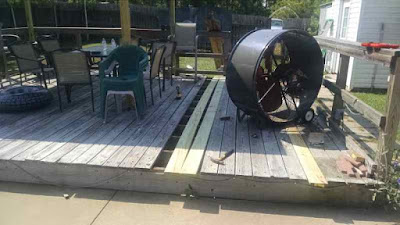 Luckily, just about the time I got to this stage, second son Matt came over to let his young'un swim in the pool.  So, I enlisted his help and with a crowbar and some screws we were able to work the warpage out of the board and make it look like it is straight. 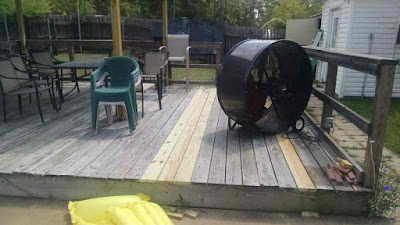 That's better and the deck is safe to use now, structurally sound and ready to entertain family and friends.  We've gotten a lot of use out of that deck, and I hope I've done all the maintenance I need to do for the next year or so.
Posted by Pawpaw at 2:21 PM

At least you caught it. And if I ever do another deck, I'd do it with the fake wood. Warping and rotting drives me batty...

Pawpaw, i know he's slowing down a little but another Sunday came and went without a dog sighting...

I'm with the old NFO on this one. I had a pair of competent friends rebuild my back deck/balcony and they talked me into using, I think, "TREX" decking. I'm a bit of a luddite when it comes to building things of wood, but that stuff is totally amazing. It will never warp, split, rot or change color. It was a bit spendy, but after five years, worth every penny. Oh yeah, fireproof too.